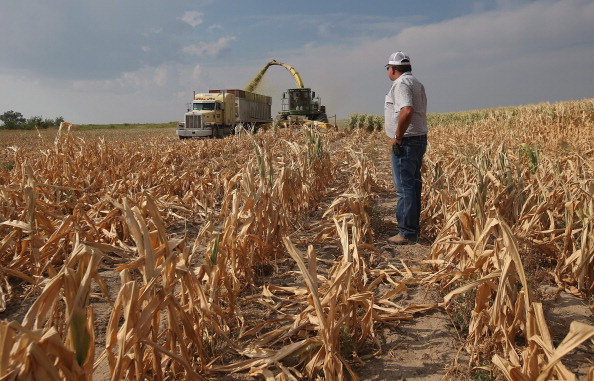 Photo ksoo.com
The Hughes County Commission declared a natural-disaster drought emergency on Monday at their regular meeting, hoping it will unleash some federal and state funds to help farmers who have already lost wheat, hay and pasture-grass crops.
The county's farmers have reported $16.85 million worth of crop losses, with 90.7 percent of those losses coming from the winter-wheat crop alone, which was planted last fall, according to assessments given to the five-man commission by Brian Stewart.
Stewart is the director of the Farm Service Agency - the federal office that runs the farm program - in Hughes and Stanley Counties.
The remaining 9.32 percent of the estimated losses come from spring wheat, alfalfa and pasture-grass crops, according to figures Stewart gave the commission on Monday.
In his "loss assessment reports," which he will turn in with the commission's emergency declaration, Stewart said that 300 farmers in the county were hit hard by the hot, dry conditions, including receiving only 61 percent of normal precipitation from Jan. 1 to June 1.
"We know there are a lot of losses to winter wheat," Stewart told the commission. "Alfalfa got hurt bad and it's not all because of drought.
We also had frost in the last week of May.
That hurt, too. But the drought has really . . . exacerbated it out there."
Even with the good that last week's rains can do, "A lot of the crops were hurt bad enough where there won't be any helping them," Stewart said.
"And we don't have all the acreage reports in yet."
Stewart was preaching to the choir.
"From what I have seen out in the county, . . in areas down by "the pocket," (in the southeast corner of the county) . . . you can count every rock out in the pasture," said Commission Chairman Norm Weaver.
"That's the eastern side of Hughes County.
Then you go north there, and I don't remember seeing winter wheat where you were able to row it, almost at the Fourth of July," he said, referring to the sickly growth of the wheat not filling in even its narrow rows.
"It's tough out there," Weaver said.
The drought disaster declaration cites "inadequate winter snowfall, inadequate spring rainfall, desolating winds and late frost conditions," which led the commissioners to unanimously declare "that said drought conditions constitute a natural disaster of such severity and magnitude that effective response is beyond the capabilities of this county, and even the state of South Dakota, and that federal assistance is necessary. . .
" That's what the commission is hoping to do with their "whereases" and resolutions.
Their declaration can help "open up emergency loans," through U.S. Department of Agriculture's programs, especially ones aimed at helping ranchers who are short of grass and hay, Stewart said. "And in the bigger picture, once you (pass this resolution), I will forward it on to the Secretary (of Agriculture Sonny Perdue).
" That could lead to a disaster declaration for the state, Stewart said.
"What that can bring, I can't tell you for sure, because Congress with a stroke of the pen can change things . . . (but) there may be some disaster money out there," Stewart's assessment reports said that county farmers lost 3.32 million bushels of winter-wheat yield on 56,311 acres in the county, caused by the hot, dry conditions since March 1 and lasting season-long, as well as a late frost at the end of May.
The lost winter-wheat bushels were valued by Stewart at $4.60 per bushel, which means a $15.28 million loss in winter-wheat income to farmers in the county.
The spring-wheat crop hasn't done too well, either, Stewart said.
He got information from farmers on 4,642 acres that showed a projected loss of 176,396 bushels valued at $5 per bushel, for a total financial loss of $881,980.
The alfalfa on 3,712 acres in the county was hit first by a late, damaging frost from May 20-22, that did an estimated $211,584 of hurt - knocking off 2,227 tons of hay valued at $95 a ton, according to Stewart.
The same acres then were hit by drought starting March 1 that will have effects all season, knocking out another 4,083 tons of alfalfa hay, for a projected financial hit of $387,904.
Alfalfa producers typically cut two to four crops of hay per season.
Ranchers in the county also reported losses in value of $89,318 on 105,500 acres of pasture, according to Stewart.