More than 101,800 suspected cholera cases in Yemen and 14.8 million without access to health care services and clean water 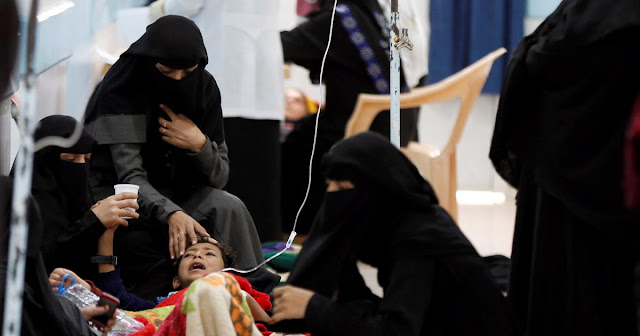 Photo nydailynews.com
A ravaging cholera outbreak in Yemen has claimed almost 800 lives in just over a month, according to the World Health Organization.
Since April 27, more than 101,800 suspected cholera cases and 789 cholera deaths have been reported in 19 of the country's 22 governorates, the WHO announced in a Twitter post in Arabic on Thursday.
WHO and United Nations Children's Fund officials are continuing to battle the outbreak.
Last month, a WHO-chartered aircraft delivered to Yemen enough intravenous fluids and cholera kits to treat about 10,000 patients.
However, Yemen's civil war has made efforts difficult, and some health officials aren't sure what to expect in the coming months.
"In the area, they are affected by direct fighting.
There are less health services available.
We know that in many districts, there are no doctors left, and only about half of health facilities are functional.
Others are closed or functioning just partially," said Tarik Jasarevic, a spokesman for the WHO in Geneva.
Since 2015, intense conflict in Yemen has left more than 18.8 million people in need of humanitarian assistance and 14.8 million without access to health care services, according to the WHO.
As of October, at least 274 health facilities have been damaged or destroyed, and 13 health workers have been killed and 31 injured in the violence.
As for the hospitals and facilities that are functioning, they are overflowing with cholera patients and their families.
Among the cholera fatalities in Yemen, about half, 46%, were under the age of 15, and 33% were over 60.
Some patients are treated outdoors due to lack of space indoors.
A few steps away from a hospital, sickened children and adults can be seen sitting under trees, pricked with needles connected to fluid bags.
"The cholera outbreak is making a bad situation for children drastically worse.
Many of the children who have died from the disease were also acutely malnourished," Dr. Meritxell Relano, UNICEF's representative in Yemen, said in a statement Thursday.
"Today, life for children in Yemen is a desperate struggle for survival, with cholera, malnutrition and the relentless violence constantly sounding a death knell at their doorsteps," she said.
Cholera, an acute diarrheal disease caused by the bacterium Vibrio cholerae, can kill within hours if left untreated.
Consuming food or water contaminated with the bacteria can lead to the illness.
Preventing cholera is reliant on having access to clean water, adequate sanitation and basic hygiene needs, from bathrooms and latrines to soap and water.
Yet in war-torn Yemen, about 14.5 million people lack consistent access to clean water and sanitation, according to the WHO.
"Basically, the problem is not being able to address the core issues," Jasarevic said of the cholera outbreak.
"That's really, first, it's clean water and treatment centers, because cholera is easily treatable."
For treatment, oral rehydration salts can replace lost fluids in cholera patients, whereas intravenous fluids and antibiotics are often used in severe cases.
Zinc treatment also has been shown to help improve cholera symptoms in some children.