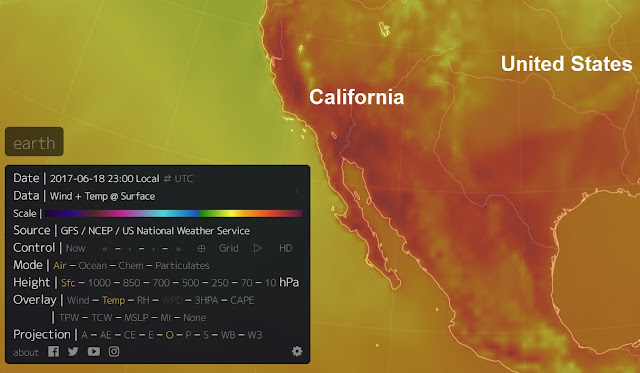 Earthwindmap
From 122 degrees in Death Valley to 100 in Sacramento, heat wave to plague California this week
A heat wave will move into the Southland starting Tuesday, with forecasters saying triple-digit temperatures are on the horizon in Los Angeles.
The heat is expected to linger through the weekend and into early next week, bringing with it elevated fire danger.
By Friday and Saturday, highs in the Valleys will reach 100 F, 38 C .
Death Valley is expected to reach 122 F, which is 50 C.
"Weak offshore flow will bring a significant increase in temperatures across interior sections on Tuesday, with temperatures expected to increase gradually each day through Friday," according to the National Weather Service.
"While there may be some cooling near the coast over the weekend due to an increase in onshore flow, interior sections are expected to remain hot and dry."
Temperatures in the 90s are expected across a wide swatch of the Southland, but triple-digit weather is likely in traditionally warmer areas, such as the Antelope Valley, lower mountains and other interior valleys.
And things aren't expected to cool off dramatically during the nighttime hours.
"The extended period of hot and dry conditions along with drying fuels will bring elevated fire danger to interior sections of Southwest California through at least early next week,"
According to the NWS. "Increased grass fire ignition with rapid spread potential will be the main fire weather threat."