Hippos mysteriously dying in Zimbabwe! Crocodile or fish or the people who ate the affected hippos have not been affected? 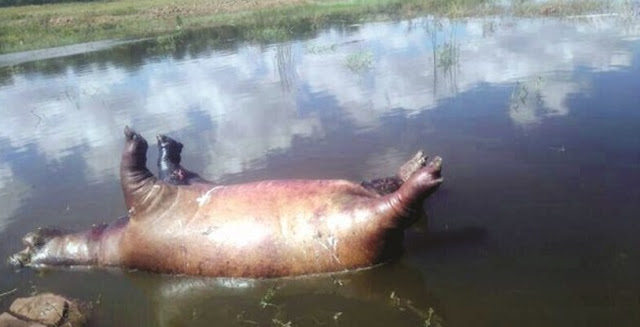 Photo Zimbabwe Today
More Hippos have mysteriously died in the Mlibizi area of Binga with authorities' saying investigations into the cause of their deaths were underway.
Cyanide poisoning has been ruled out.
The Zimbabwe Parks and Wildlife Management Authority (Zimparks) last week said 13 hippos had died at Kavira Forest which is run by the Forestry Commission and preliminary findings point to an anthrax attack but DNA tests were being done to confirm the findings.
Yesterday, the Forestry Commission Spokesperson, Ms Violet Makoto, said 16 hippos have now died and the number could go up.
"Following the first report which was made on 27 March 2017, at least 16 hippos have died, being found floating in Mlibizi River in Kavira Forest.
"According to some authorities, preliminary findings have shown that there were traces of bacteria that causes anthrax in the samples that were analysed and further investigations are underway," Ms Makoto said.
She said they were suspecting that the hippos grazed at one of the surrounding irrigation schemes where some chemicals could have been applied.
Ms Makoto said cyanide poisoning had been ruled out as crocodiles, fish and people from surrounding communities were not affected.
"Not a single crocodile or fish or the people who ate the affected hippos have been affected.
This has made us rule out cyanide poisoning.
"No record of anthrax had been recorded in the area recently although tests have been done.
We are suspecting someone sprayed some type of pesticides in the irrigation scheme," she said.
"My team and its partners who include Veterinary Department, Campfire, Environmental Management Agency, ZimParks, chiefs as well as the Binga Rural District Council have strengthened awareness campaigns in the entire Binga District.
We are educating people on the dangers of consuming the meat as we don't know the causes of death yet."
Over the past three years, hundreds of elephants have died due to suspected cyanide poisoning allegedly administered by poachers at Hwange National Park and the Zambezi Valley.
Some illegal hunters have been arrested and charged with poaching and possessing cyanide.