Colombia's darkest day! 254 dead from the mud and rubble left by an avalanche with hundreds still missing: 400 injured: More rain to come! 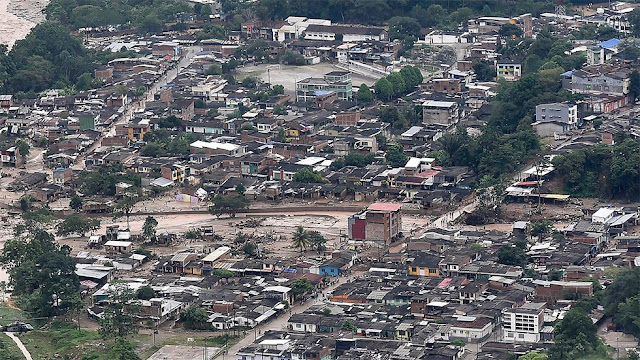 Photo Presidents Office
As night fell after one of Colombia’s darkest days in recent history, rescue workers had pulled 254 dead from the mud and rubble left by an avalanche that devastated the southern town of Mocoa. Hundreds of people were still missing as the sun went down.
An army statement said there were at least 400 injured and hundreds still missing in the capital of Putumayo province. In a state of shock, and without electricity or drinking water, the inhabitants of the town entered their first night after the disaster that destroyed much of the capital of the Putumayo province.
Ongoing rains spur fears that the waters of the Mocoa,
Mulato and the Sancoyaco rivers could swell and overflow again, making nocturnal rescue work even more dangerous.
According to the mayor, “much” of the town suffered damaged because of the avalanche, with at least one central neighborhood wiped off the face of the earth entirely.
Seventeen neighborhoods were affected.
Some of them disappeared entirely like San Miguel, and parts of Los Laureles, San Fernando and El Progreso, which is where I live.
The house has been completely destroyed.
The rains are are going to remain inclement and I fear they could lead to another tragedy to add to the pain we people from Putumayo are already feeling.

In Mocoa, the excess in rainfall caused the overnight overflowing of three rivers, the Mocoa, the Mulato and the Sancoyaco, that wiped away “much of the city” little after midnight, Mayor Jose Antonio Castro was quoted as saying by newspaper El Tiempo.March was the country's rainiest month since 2011, according to the state meteorological agency. Putumayo borders Ecuador and Peru.

Almost a hundred dead in Peru
Across Peru more than 90 people have died since the start of the year because of unusually heavy rainfall, which also caused landslides and flash floods.Peruvians struggled to cope with avalanches, mudslides and extensive flash flooding caused by torrential downpours.It has been a bad year for flooding in Peru, and the toll including from the latest dangerous weather now stands at over 90 with many still missing, the government said.Devastating damage reports continue to pour in.The National Emergency Operations Center said over 150,000 Peruvians had lost everything since the beginning of the year, while nearly 1 million had suffered serious damage to their homes.