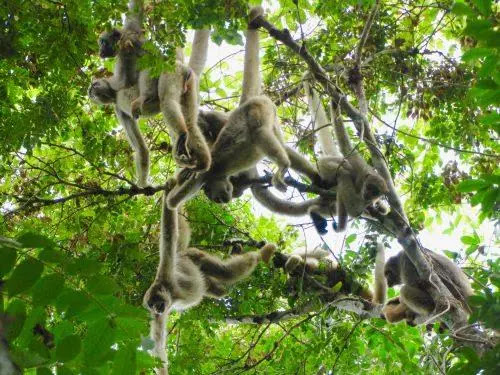 Photo ibtimes.com
An unprecedented wave of death that has swept through Brazil since late 2016 is killing thousands of monkeys. A recent and unprecedented outbreak of the mosquito-borne virus, yellow fever, has killed thousands of monkeys in the region, including nearly all of the brown howler monkeys.
Yellow fever has killed thousands of the rare monkeys and there is no vaccine for the monkeys who are dying en masse in Espírito Santo and Minas Gerais, the two states so far worst hit.
“Some 80 to 90 per cent of the brown howler monkeys are infected or have already died,” says Sergio Mendes at the Federal University of Espírito Santo in Vitoria, Brazil.
“This is a true catastrophe.
These outbreaks happen periodically, but this is the worst I’ve ever seen.”
Scientists say they have never seen monkeys perish in such numbers, so quickly, from disease.

The way yellow fever has spread also concerns Brazilian health officials.  As of mid-March 2017, they have confirmed more than 400 human cases of the disease, mostly in Minas Gerais, causing nearly 150 human deaths. The Brazilian Ministry of Health is investigating another 900 possible cases and concern is mounting that it will spread to cities, threatening many more people.

Brazilian authorities also want to protect the monkeys from people who fear the animals may be spreading the disease. "We need to show that they help inform when the virus arrives in a region, because being more sensitive than humans, they die first," Mendes explains.

A dead monkey is like a canary in a coal mine, alerting public health officials that a pathogen may be present, mobilizing preventative and precautionary efforts. So, what does it mean when so many have perished?

"No one really knows the consequences for the other primates or the forest when nearly the entire population of an abundant species dies from disease in just a few months," says Strier. "We are in a position to learn things we never knew before, with all the background information that we have collected."