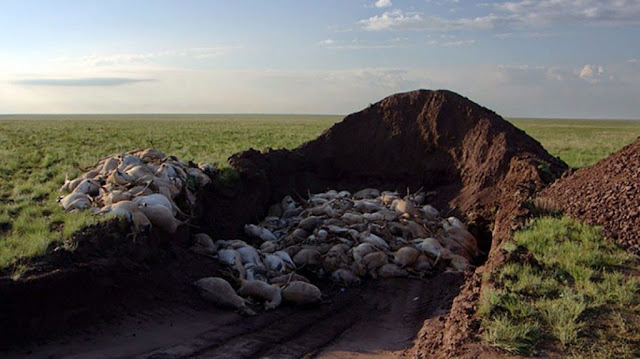 Photo Earth First! Journal
A one-of-a-kind Central Asian antelope already up to its horns in threats is facing an ugly new one that's taken scientists by surprise.
About 900 saiga - tawny steppeland antelope distinguished by wacky bulbous noses and a penchant for long-distance travel - have died on the plains of western Mongolia's Khovd Province.
The deaths amount to almost ten percent of the total population of this distinct Mongolian subspecies, which is less numerous and less migratory than the saiga on the other side of the Altai Mountains in Kazakhstan, Uzbekistan and Russia.
What's killing off these wonderfully odd-looking grassland grazers?
According to the Food and Agriculture Organization (FAO) of the United Nations, the likely culprit is a viral infection called the Peste des Petits Ruminants (PPR), also known as ovine rinderpest or goat plague, a dread disease of domestic sheep and goats that can have a 90 percent fatality rate.
Together with the World Organisation for Animal Health (OIE), the FAO is currently spearheading the PPR Eradication Programme, an international effort to wipe out ovine rinderpest by 2030.
The disease threatens small domestic ruminants and the rural livelihoods dependent on them in some 75 African and Eurasian countries.
Mongolia experienced its first recorded PPR outbreak among livestock in September 2016, and it's possible that the virus hopped to saiga on winter rangeland where the antelope overlap with domestic herds.
It's an unprecedented situation, as the FAO notes in a press release: "While wildlife have long been considered potentially vulnerable, relatively few actual cases of PPR infection have been documented in free ranging wild goat-like species and never in free-ranging antelope."
The PPR plague may be novel, but disease outbreaks and mass die-offs are nothing new for the saiga, which in 2014 was thought to number some 262,000 worldwide.
Numerous large-scale fatality events have occurred in recent decades among the more widespread western subspecies.
Many of these die-offs occur in spring, when saiga ewes gather on calving grounds.
Like many before them, these die-offs were linked to virulent outbreaks of the bacterium Pasteurella multocida - a pathogen found in saiga that normally isn't deadly - in concert with extreme weather fluctuations and other environmental factors that biologists are still trying to sort out.
Over the centuries, saiga numbers in Central Asia have risen and fallen for many reasons.
Because ewes commonly bear twins, herds can undergo rapid population spikes, while thousands may die at a time not just from various epidemics, but also from severe winters.
In modern times, such natural boom-and-bust cycles have played out against a backdrop of human-caused decline via overhunting for meat, poaching (the horns of saiga bucks are valued in Asian medicine), competition with livestock, and widespread habitat destruction and fragmentation in the region's steppes, which is particularly devastating to migratory herds.
In Mongolia, meanwhile, wildlife health experts fear the ramifications of a PPR onslaught among Mongolian saiga given their already small populations - only 5,000 to 7,000 remain.
"More field investigations will have to be carried out to know the extent of the recent outbreak.
If PPR is confirmed to be the main cause, the saiga death toll is likely to reach into the thousands in the next three months," warns Bouna Diop of the PPR Eradication Programme.
In an effort to counter the contagion's spread, authorities hope to keep domestic animals as separate as possible from saiga herds, and are urging local herders to vaccinate their sheep and goats.