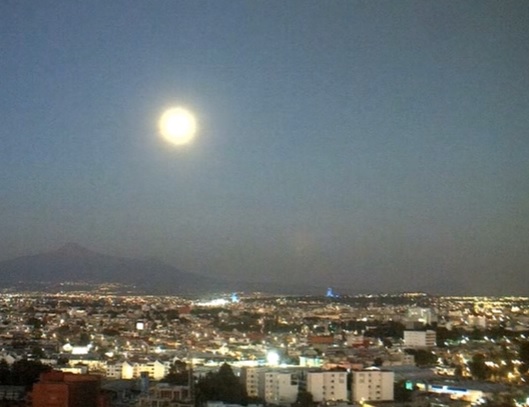 Sent in by Chessie Crowe Gartmayer

According to a WebcamsdeMexico spokesman these mysterious lights are balloons of cantoya. Cantoya balloons are big balloons made out of thousands of china paper sheets (from 4 to 2000 or more) and propelled to the sky by fire.
I’m glad about that because I thought it was swamp gas! 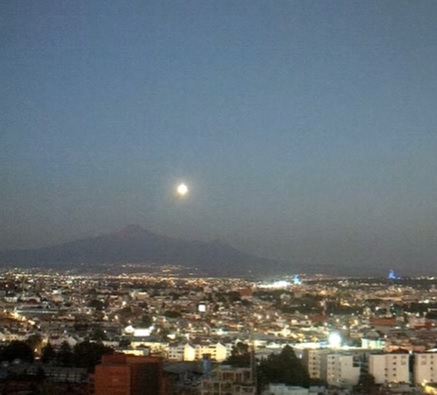 As to how they can suddenly quadrupole in size they didn’t say.
Lights in and around volcanoes is a strange phenomenon, as for what the lights are I would only be adding to the speculation but this kind of light show is very common, so people who read The Big Wobble, what is it?

I wonder why the object came in the direction it did... was there prevailing winds or something? the light emmiting object selected a patgh towards the city instead of anywhere else.. odd or what
I say it is an autonomous Drone by some black-ops group like CIA

Can balloons change their size instantly/massively ?
appear out of nowhere ?
Look like the damned sun ?
Maybe it's just me, But balloons would have been the last
explanation anyone could have thought of, After (ALL) other
explanations have been tried. Pllleease !

Most of us will believe them! Not all though...

wow that is crazy!...of course we have to come to 'alternative' sources for the facts now....the abyss keeps growing between MSM and everyone else..they do not need any help digging their own grave..they do it very well on their own

I have been reading alternative media since 2004. The abyss between the real news we get from alternative media as opposed to Corporate Media has not grown .What we are seeing is an increasing number of people, by the millions FINALLY realizing Corporate media has been manipulating the average thrusting viewer for decades. Thanks to sites like this one we can witness what is an unbelievable change in this world at an incredibly alarming rate as to make me wonder, are we watching the beginning of the End Times ? Read the Book of Revelation , read the Big Wobble and pray, prepare and hope your worthy to escape the he'll on earth that has just begun. Tribulation has just begun. Thanks Big Wobble.