At least seven people died, hundreds of livestock dead and more than 60 homes destroyed as a snowstorm hits Afghanistan 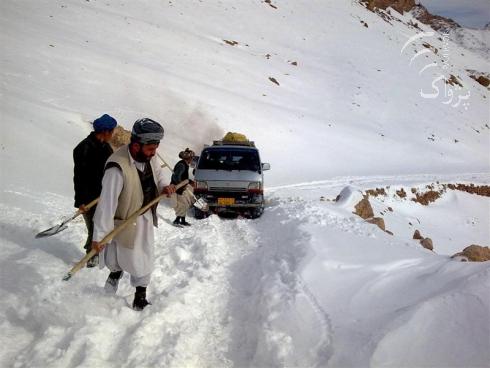 Photo AFGHANISTAN TIMES
At least seven people died, hundreds of livestock perished and more than 60 homes destroyed as a snowstorm entered a second day in northern Sar-i-Pul province on Saturday.
Eng. Aziz Rahman Imaq, the provincial natural disaster management authority head, told a press conference here that the continued snowfall for two days had caused human and financial losses in Sar-i-Pul.
He said 30 to 80 centimeters of snow was recorded in some areas and seven people including three women and a child lost their lives to the blizzard in Sayyad, Sozma Qala and Balkhab districts.
Imaq said more than 60 residential buildings had also also destroyed and hundreds of cattle lost.
He said edible and other essential items were delivered to around 2,000 affected people by relevant organs.
If needed, more commodities would be distributed to the affected families by air.
A day earlier, four minibuses stuck in snow in a pass in Balkhab district on Friday night were rescued by police and local people.
Mohammad Noor Rahmani, provincial council head, expressed concern over the situation and said most of roads to districts had been cut off from the provincial capital, Sar-i-Pul city.
A provincial council member, Mohammad Ali Hakimi, said Balkhab River had stopped due to heavy snow and reportedly 40 homers had been destroyed in the district.
The deaths come after Heavy snowfall and freezing weather led to the death of 27 children, all under the age of five, in a remote district in northern Afghanistan, officials said last Thursday, amid fears that the toll could rise. Roads in Darzaab in northern Jawzjan province were blocked by 50 centimetres (20 inches) of snow, cutting off access for villagers in the area to medical care as temperatures plunged to -10 degrees Celsius (14 Fahrenheit).
"Unfortunately we have 27 children killed due to heavy snowfall and freezing weather," district governor Rahmatullah Hashar told AFP, saying the deaths had occurred over the last two or three days.All the children were under the age of five, he said, adding the blocked roads mean the toll could still increase.