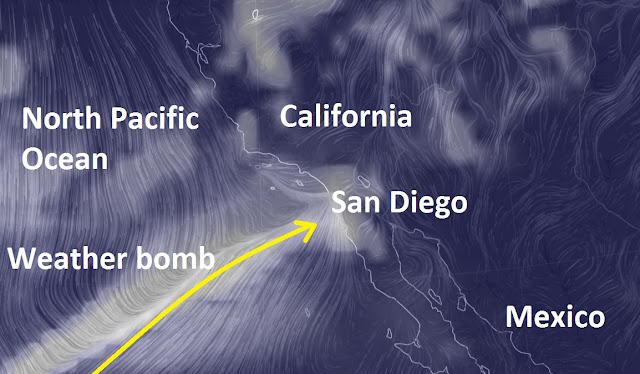 Throughout the rest of the night, rainfall rates are expected to increase 0.25 to 0.5 inches until 8 p.m., according to the NWS.
The added rainfall will create creeks and dangerous small river flooding, including the San Diego River.
An airport weather warning was issued through 6 p.m. Monday because strong wind gusts of 30 knots or greater were possible at San Diego International Airport.
A low pressure system from the northwest will tap a plume of subtropical moisture directed into northern Baja to bring periods of locally heavy rainfall from late this morning into early this evening, the NWS said.
One to 3 inches of rain are in the forecast.
As of midday, Mt. Woodson had received 2.98 inches of rain with San Ysidro reporting 1.82 inches. More than a third of an inch of rain has fallen in Borrego Springs.
In Imperial Beach, there was flooding at Coronado Avenue and Gaywood Street. Storm runoff was pooling up to 6 inches in the corner.
Near the Tijuana River Estuary on 19th Street, the roadway was flooded.
A large truck was about to drive through but the driver turned around because the water was just too deep.
A flash flood watch was in effect through 10 p.m