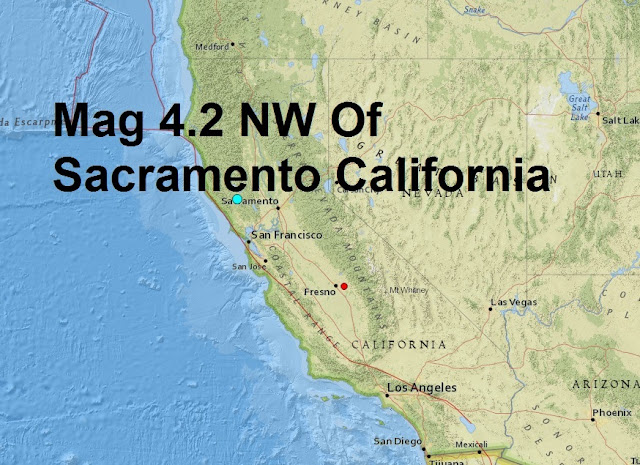 USGS
A magnitude 4.2 quake was registered just 50 miles north west of Sacramento this morning which is uncomfortably close to the stricken and full to capacity Oroville Dam as The Sacramento Bee reports Reservoirs feeding Lake Oroville are filled to brim as more rain rolls in.
In fact, all of the nine reservoirs in the Feather River watershed that feed directly into Lake Oroville are brimming with water from recent storms.
A tense flood watch is developing in the San Joaquin River community with flashbacks of past floods setting in and the river gathering in speed and height, county emergency officials have told low-lying residents of the club to be ready to evacuate. Those closest to the levee have packed their bags and set up ground pumps to force the water creeping up to their homes into a lake.
The SFGATE is reporting San Francisco's total rainfall surpassed normal for a full season as of 5 a.m. Monday.
Average rainfall for a season, running October 1 to September 31, is 23.65 inches.
S.F. had seen 24.38 inches as of this morning. The total reached this benchmark after a moisture-packed storm driven by an atmospheric river walloped Northern California. The City by the Bay received nearly an inch in 24 hours.
It's nearly impossible to exaggerate this milestone after five seasons marked by drought and below-average rainfall. "We haven't even reached rainfall in an entire season in five years," said Jan Null, a meteorologist with Golden Gate Weather Services. "The fact that we've gotten there in the middle of February is noteworthy."
A series of weather systems known as atmospheric rivers have blasted Northern California since the start of the year, resulting in impressive rainfall totals around the Bay Area.
These plumes of vapor originate in the Pacific, and collect tropical moisture as they travel across the ocean. Upon making landfall, they turn on like fire hoses, spewing rain and snow.


Northern California typically sees one or two atmospheric rivers in the winter. This year they've hit in rapid succession and the region has had at least five.