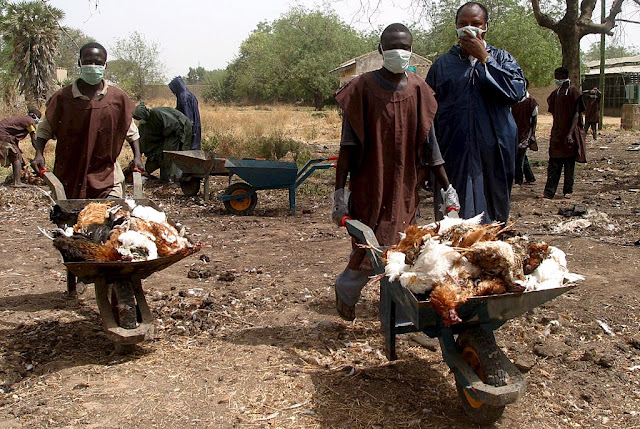 Photo FaceToFaceAfrica
A devastating new strain of Avian Influenza has hit the poultry industry with over 3.5 million birds affected currently, the Minister of Agriculture, Audu Ogbeh has revealed.
Ogbeh spoke yesterday in Abuja during a meeting with commissioners of livestock, state directors of veterinary services and major stakeholders in the poultry industry.
According to the minister, the new strain is very pathogenic and more devastating to poultry species. He said the new virus, H5N8, which was discovered in Kano State would further add to the burdens of the strain, H5N1 that is currently circulating in about 26 states of the federation. Ogbeh lamented that the disease which is trans-boundary in nature has caused some of the country's neighbours to propose a ban on chicken and poultry products from Nigeria.
He said: "This may lead to egg glut in the country.
There are already huge losses to the poultry industry.
I feel the pains of those affected firstly as a poultry farmer and also as a minister responsible for the availability and safety of food taken by Nigerians, as well as the diversification of the economy through agriculture."
The minister blamed the current outbreak on the inability of poultry farmers to comply with quarantine measures and movement restriction, violation of bio-security rules and non-adherence to basic hygienic.
He said to address some of the challenges, the Federal Government in collaboration with major stakeholders in the industry has provided some disease containment materials like disinfectants, personnel, protective equipment, plastic transport crates, syringes and needles, disposable gloves, sample bottles and others to all states of the federation.
Meanwhile, the Federal Government has warned poultry farmers against vaccination of birds infected by the virus, saying this may worsen the situation of the disease.
Ogbeh, who said there is currently no vaccine to cure the disease, advised that sensitisation and control are the only solutions to tackle the outbreak now.