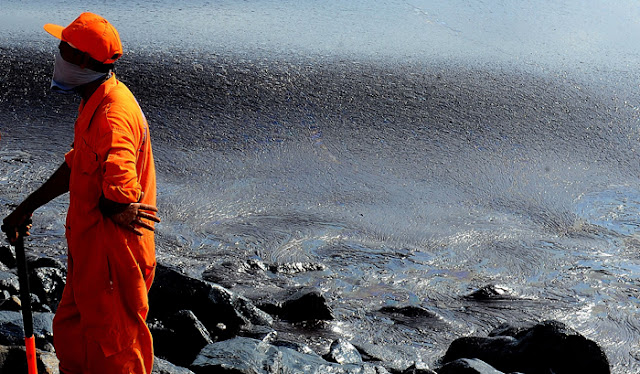 Photo India Times
An oil spill due to the collision between two petroleum product carriers off the Kamarajar Port in Chennai spread to 25km on Monday from the site of the accident.
On Saturday morning, the fuel tank of an oil tanker burst following the collision with an LPG-carrying vessel that led to a marine disaster.
The oil spill led to the death of hundreds of turtles and fish that washed up on the shore even as the slush reached beyond the Marina beach as ill-equipped pollution-response teams of the Coast Guard grappled to contain the crisis.
About 2 tonnes of heavy furnace oil is suspected to have leaked into the sea from the fuel tank of MT Dawn Kanchipuram as BW Maple collided with it on Saturday morning.
MT Dawn Kanchipuram, which was carrying nearly 45,000 tonnes of petroleum products, was entering the port.
The two ships have been anchored about 2.5 nautical miles from the north breakwater of Kamarajar port.
An inquiry officer quoted by a news agency attributed the accident to human error and lack of communication on the part of the crews.
Tamil Nadu Pollution Control Board officials said the clean-up could take some days as the oil slick had spread far.
Many local fishermen kept away from the sea, citing the possibility of a mid-sea fire.
Coast Guard personnel used 25-litre buckets to scoop out the spilled oil.
But when they stopped work at dawn on Monday , only a fraction of the oil had been removed. Reinforcements are expected to arrive from Delhi on Tuesday to expedite the clean-up process.
Coast Guard staff faced setbacks as two submersible pumps used to remove the sludge broke down. With no other equipment at hand, they used buckets to scoop out the oil.
A long line of workers and locals passed around oilfilled buckets from the shore to 1,000litre tankers waiting by the roadside.
The smell of oil, which had concentrated on the shore, wafted through the neighbourhood.
Rocks on the coast were coated in sludge.
Oil drifted on the surface of the sea at the rate of eight to 10cm per second as strong northeasterly winds and southerly longshore currents pushed the slick kilometres away from the site of the collision.