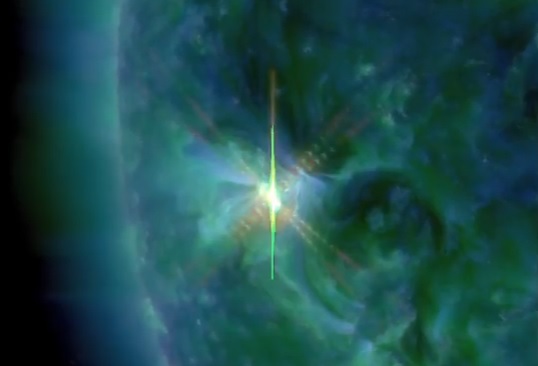 Our very quiet Sun has released two very unexpected M-class flares, the biggest flares since the M1.3 way back at the beginning of August this year.
We have to go even further back for the last X-class flare which occured on the 5th of May 2015.

What is an X-class flare?

The biggest flares are known as "X-class flares" based on a classification system that divides solar flares according to their strength.
The smallest ones are A-class (near background levels), followed by B, C, M and X. Similar to the Richter scale for earthquakes, each letter represents a 10-fold increase in energy output.
So an X is ten times an M and 100 times a C.
Within each letter class there is a finer scale from 1 to 9.
C-class and smaller flares are too weak to noticeably affect Earth.
M-class flares can cause brief radio blackouts at the poles and minor radiation storms that might endanger astronauts.
And then come the X-class flares.
Although X is the last letter, there are flares more than 10 times the power of an X1, so X-class flares can go higher than 9.
The most powerful flare measured with modern methods was in 2003, during the last solar maximum, and it was so powerful that it overloaded the sensors measuring it.
The sensors cut out at X28.
The biggest X-class flares are by far the largest explosions in the solar system and are awesome to watch.
Loops tens of times the size of Earth leap up off the sun's surface when the sun's magnetic fields cross over each other and reconnect.
In the biggest events, this reconnection process can produce as much energy as a billion hydrogen bombs. If they're directed at Earth, such flares and associated CMEs can create long lasting radiation storms that can harm satellites, communications systems, and even ground-based technologies and power grids.
X-class flares on December 5 and December 6, 2006, for example, triggered a CME that interfered with GPS signals being sent to ground-based receivers.

The sun is now entering an 11 year cycle period of calm, meaning less and smaller solar flares.
The sun has looked remarkably blank lately, with few dark cores interrupting the featureless solar disk. This is a sign that Solar Minimum is coming. Indeed, sunspot counts have just reached their lowest level since 2011. With respect to the sunspot cycle, you are here 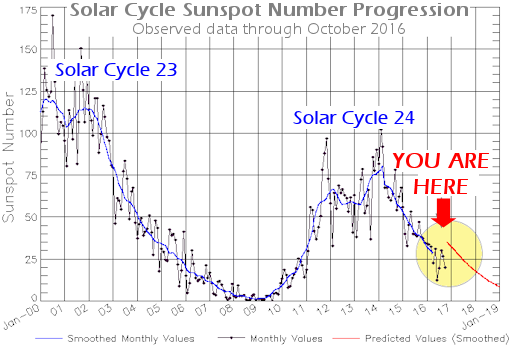 The solar cycle is like a pendulum, swinging back and forth between periods of high and low sunspot number every 11 years.
These data from NOAA show that the pendulum is swinging toward low sunspot numbers even faster than expected.
(The red line is the forecast; black dots are actual measurements.).
Given the current progression, forecasters expect the cycle to bottom out with a deep Solar Minimum in 2019-2020. Source