3 people killed, 4 children critically injured as storms batter the deep south in the US; More storms to come 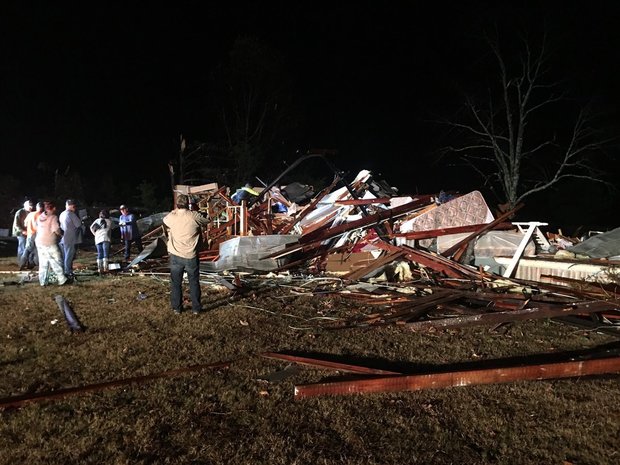 Two people were taken to the hospital after a Tuscumbia home was damaged due to a storm that came through Colbert County on Nov. 29, 2016. (Colbert County EMA)


Severe storms turn deadly but bring much needed rain to the deep south of the US.
This morning a massive, fast moving thunder storm from New Orleans all the way up to North Carolina will be heading south east.
Alex Sosnowski, AccuWeather senior meteorologist reports; the storm threat will continue into the early morning hours on Wednesday.
The greatest risk of tornadoes will extend from central and north-eastern Louisiana to western and northern Mississippi and part of south-western Tennessee. The threat includes the cities of Monroe, Louisiana, as well as Jackson, Vicksburg and Tupelo, Mississippi.

Some live updates from Breaking news…

Storms leave 3 people dead in Rosalie, Ala., Jackson County Sheriff's Office confirms - WAFF
More than 1,000 people are in shelters after a firestorm burned through Sevier County, Tenn., destroying dozens of homes and businesses.

National Weather Service tornado warnings for northern Alabama: 'Flying debris will be dangerous to those caught without shelter. Mobile homes will be damaged or destroyed. Damage to roofs, windows and vehicles will occur. Tree damage is likely.'

Meteorologist for WHNT says storm that hit Rosalie, Ala., leaving 3 dead appears to have been a 'significant tornado'

Tornado warning in Alabama in effect for Cullman, Ala., Good Hope, Ala. and Holly Pond, Ala. - National Weather Service