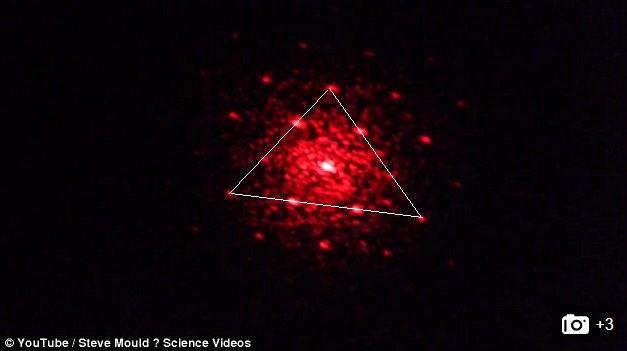 The "All Seeing Eye?"
The new Bank of England's new plastic £5 notes has a hidden hologram showing the 'The Eye of Providence' or more common the all seeing eye, used on the American Dollar, Today, the Eye of Providence is often associated with Freemasonry.
Popular among conspiracy theorists is the claim that the Eye of Providence shown atop an unfinished pyramid on the Great Seal of the United States indicates the influence of Freemasonry in the founding of the United States.
The Bank of England's new plastic £5 notes are said to be virtually indestructible -difficult to tear and capable of surviving a washing machine.
But in addition to its durability, science presenter Steve Mould has discovered a cool hidden feature relating to the window of the new note.
Mr Mould explained: 'If you shine a laser pointer through just the right spot on the Queen's neck then project it on to the opposite wall you'll see a triangular star field.'

The Queen's face in the window of the new £5 note acts like a diffraction grating so that when you shine a laser through it projects this cool interference pattern.
Visit my blog here: http://stevemould.com
Follow me on twitter here: http://twitter.com/moulds
Buy nerdy maths things here: http://mathsgear.co.uk

They are killing the bees too! Millions of bees dead after Florida and South Carolina spray for Zika mosquitoes
at September 30, 2016

Blogs are so interactive where we get lots of informative on any topics...... nice job keep it up !