Monthly Report
April the 4th month of probably the most important decade in the history of mankind sees a rise of 2,343,443 Covid-19 cases in just 30 days: Almost 300 million are facing starvation due to locusts swarms and much much more!

On April the 1st the total number of confirmed cases from the coronavirus was 862,890 with 30,000 in a critical condition. Total deaths were at, 42,196 and the world was in a panic, little did we know then that by the end of April the total number of confirmed cases from the coronavirus would be at an incredible 3,206,333 a rise of 2,343,443 in just 30 days, with a death toll of 227,958 and most governments in the Western world claiming the death toll is a very conservative figure and is certainly much higher. April was the 4th month of probably the most important decade in the history of mankind and it's not looking good.Elsewhere, more swarms of locusts continue to form in the Horn of Africa, Arabia and Asia. An insect that multiplies 20-fold with each new generation every three months. It is the same species of locust God used against the Egyptians in the epic Bible Book of Exodus. The Desert Locust (Schistocerca gregaria), and they are the most destructive migratory pest in the world.

Behold A Pale Horse! February 2020: The 2nd month of the most important decade in the history of the human race was like a roaring lion: Famine, Death, Disease and Disaster Dominate 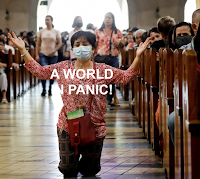 If January was anything to go by 2020 is going to be a very rough ride and once again haunting news is headlining across the media about the coronavirus and its rapid spread around the world. Some of the articles are bewildering, some hard to believe others crude lies but never the less, whichever news site one visits, the headline is the coronavirus pandemic.
Today, in a new twist, Chinese health experts are warning the public that coronavirus patients can become reinfected, which is unusual for a virus. A report on Zero Hedge today, claimed the coronavirus contains "HIV insertions", stoking fears over the virus has been an artificially created bioweapon? As I mentioned earlier, some of the articles one reads are bewildering. The U.S. has declared the coronavirus a public health emergency after imposing quarantines. Coach drivers are seen transporting coronavirus evacuees in the UK without protection, the drivers will apparently be given two weeks off to 'self-isolate' but the government insists they did not need protective clothing, which sounds absolutely insane to me
Behold A Pale Horse! January 2020: Probably one of the most historic months in the history of mankind: The first month in probably the most important decade for mankind

January 1st 2020.
There is only one story on everyone's lips, the Australian bushfires, which started way back on September the 7th 2019, are burning more intensely than ever. As of today, it has been reported by the Times that almost 500 million animals have died in the fires, just to put that figure into some kind of perspective 500 million is the population of the European Union. In just 4 months, 500 million creatures have perished due to the fires. Some of the “mega-fires” are thought to be unstoppable.