2022 Signs And Wonders! Almost 250 pilot whales were stranded on Tasmania’s west coast: Incredibly in the same spot, 500 pilot whales have also been stranded two years ago to the very day! What is the reason and what are the odds? 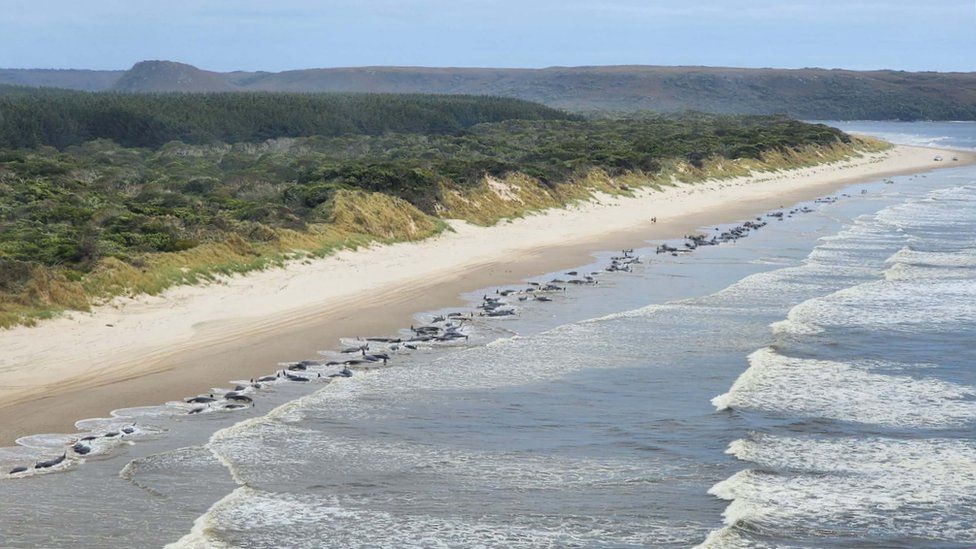 An aerial view of the whales stranded on Tasmania's west coast, credit Department Of Natural Resources And Environment.

The department said a team from the Marine Conservation Program was assembling whale rescue gear and heading to the area. A resident told the Australian Broadcasting Corp., that the whales were visible near the entrance to Macquarie Harbour and described the stranding as a “massive event.” David Midson, general manager of the West Coast Council, urged people to stay clear. “Whales are a protected species, even once deceased, and it is an offence to interfere with a carcass,” the environment department said.

Griffith University marine scientist Olaf Meynecke said it’s unusual for sperm whales to wash ashore. He [noted] that warmer temperatures could also be changing the ocean currents and moving the whale’s traditional food sources. “They will be going to different areas and searching for different food sources,” Meynecke said. “When they do this, they are not in the best physical condition because they might be starving so this can lead them to take more risks and maybe go closer to shore.”

Fourteen sperm whales were discovered Monday afternoon on King Island, part of the state of Tasmania in the Bass Strait between Melbourne and Tasmania’s northern coast. The department said it is not unusual for sperm whales to be sighted in Tasmania. The pilot whale is notorious for stranding in mass numbers, for reasons that are not entirely understood. Two years ago, about 470 long-finned pilot whales were found beached on sandbars off Tasmania’s west coast in the largest mass stranding on record in Australia. After a weeklong effort, 111 of those whales were rescued but the rest died.