Thousands of sick elderly and poor could die this winter in the West from cold and hunger—European energy rationing on the cards: There is emerging proof that no way near enough gas is available in Europe for the autumn and winter heating season and what there is will only be affordable to the well-off! 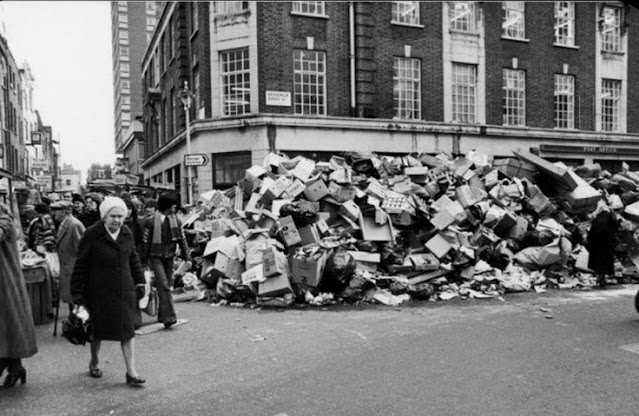 The last time Britain had a winter of discontent—1978-79 saw general strikes and riots which brought the government to its knees.

It will be a  winter of discontent—Thousands of militant strike actions are on the cards in Europe as the governments and company bosses are expecting workers to pay for the staggering energy price hacks and inflation coming our way.

That extremely loud warning, deafening, and unbelievably close by, I mentioned here just got even louder and even closer. . .

Europe has now been warned, that not only are its energy prices, gas, and electricity expected to more than triple by next January but, what little gas there is, will probably have to be rationed as well, according to energy giant Shell.

Last month, Germany was the first European country to move toward gas rationing by triggering a three-system 'alarm' stage of an emergency gas plan amid fears of tighter supplies. Germany's fears increased earlier this week when the gas pipeline supply from Russia was cut-off for ten days for maintenance repairs but many experts believe they won't be turned back on.

The Italian government is under massive pressure after their energy giant Eni revealed last month it was only getting half of its requested 63 million cubic meters a day from the Russian suppliers Gazprom.

Hungary’s government has declared an “energy emergency” in response to supply disruptions and skyrocketing energy prices in Europe, an official said Wednesday. There is “unlikely to be enough gas in Europe for the autumn and winter heating season,” said Gergely Gulyás, Prime Minister Viktor Orbán’s chief of staff.

Leaks have forced a stoppage at a Norwegian gas platform in the North Sea, Reuters reports. A Norwegian gas platform and the transportation hub Sleipner Riser at the same field were shut down on Tuesday after separate gas leaks occurred, operator Equinor said. The company indicated it was unclear when operations would resume. "A gas leak at the Sleipner A [platform] occurred yesterday morning," an Equinor spokesperson stated, adding "No person was injured and production was shut. When we tried to restart, a new gas leak occurred, late Monday night. "Sleipner Riser is a key hub for the transport of North Sea gas to Britain and Belgium.

According to a report on the BBC, Europe's gas stocks are only 62.6% full and there are fears that meeting the target of at least 80% for winter will be difficult. Several countries, such as Poland, Bulgaria, Finland, Denmark, and the Netherlands had their Russian gas deliveries suspended after they refused a Russian demand to pay in roubles. The UK imports less than 5% of its natural gas from Russia, but is reliant on Norway for a third of supplies. There are concerns that if Russia cuts supplies to the European Union further, or the bloc boycotts purchasing gas, then competition for supplies would increase. Which would push up prices even further, not just in Europe but around the world.

To make matters worse Europe is in the grip of a record-breaking heatwave with temperatures hitting 40 deg C, 104 deg F in many areas which is expected to continue well into next week, and for some, this heatwave is the second and third of a summer which has just begun.

Thousands of residents and holidaymakers have been evacuated from towns and villages in France Portugal and Spain as the inevitable wildfires explode. The heatwaves have already claimed hundreds of lives.

"Thousands of sick and elderly could die this winter..." lack of fuel to heat and eat....yes, that is what appears to be expected when no fuel for energy can be had. But wait! I thought technology was so great that no one should get sick and die anymore?!... I mean we have a pill or vaccine for just about everything these days, right?, so then why are so many people sick and dying!!!??
Twisted lies if anyone is paying attention.
I have said to Gary in comments here a few times that pathogens do not jump spieces. That is true by God's creation,but what I failed to know for certain was big pharma has put a DNA twist on life already by creating so many genetically engineered/modified laboratory creations and releasing/released them in to the entire Earth environment therefore changing the rules of creation. It's done, happened, irreversible now. No one knows though, but it is an official fact.

Stupid, I knew of the past few years in my home state that GMO mosquitoes in the billions have been released in to our environment while residents loudly objected and were ignored. I know also we are being sprayed with toxic geoengineering materials that all ingredients are not known causing the imagination to run wild. On and on it goes and I know, but force of habit I guess to say pathogens don't jump spieces....uh now they do.
*Pfizer spends more $ on public relations (aka, ad's and political lobbying) then it does on research and development of their poison products. Fact.
One "biosecurity researcher" on the pharma payroll has publicly stated to press that; "viruses used in these vaccines could themselves easily mutate, JUMP SPIECES!..."
There it is, their confession and my correction. Hmmm, is that why the current covid issue has a new mutated variant every few months. Certainly seems to fit, but just guessing on that one.

Read this link if you want to know more and since I can only type so many words for comment posting allotment, so can't say all I would like to about this evil twisted BS we are under attack by.
https://hatchardreport.com/self-spreading-vaccines-are-coming-for-you/

In that report is the link proving what that biosecurity researcher said in March 2022 to National Geographic.
Listen, there are still many uncertainties and "words" used in these reports I share are still in our favor, "could be", "might be", "imagine", "the goal", ...words like that mean it is not quite there yet as implied so that is why much prayer is needed to the failure of their "goal(s)."
Big Amen!

In order to provide more evidence to the absolute truth of your post here Gary, feel free to type in this link and listen to what is told in the interview. Plenty of additional links at the end of the report as well if you want to know more.
It's not just lack of energy for fuel that is expected to cause hardships on our lives, but that of course is a big main part of all the "shortages" coming to pass now.

* "A U.S. patent outlines a way to cool our planet by detonating nuclear bombs, has sanity completely left the equation? In countless parts of the world lakes and reservoirs are drying up and rivers are running dry. In other regions the entire landscape is being inundated with relentless rains and flooding. Crop production is being crushed from weather mayhem, food supply chains are breaking down. Covert climate intervention operations are inseparable from ALL of it,..."(!!).
geoengineeringwatch.org (most recent post 7/16/22)
The watchdog interview with Dane Wigington:
https://usawatchdog.com/40-million-in-us-west-without-water-in-2023-dane-wigington/

No crops, no water for crops or drinking, now no fertilizer or mandated reductions on it and Climate collapse spells exactly what is expected as Gary posted. It's not able to recover either as is because the causes are never stopped or admitted. You must take this seriously now because it is our reality and your revelation to the knowledge that will help you endure until our Savior arrives, soon! "My people perish from a lack of knowledge".
IMHO and from my continuous and non stop monitoring on this weather subject I warn of, Dane is the only decent human telling the truth. Been following him and the sky candy for 11 years now since God woke me up to it.

Thousands of sick and elderly die each winter anyway.