Feet of mingled iron and clay: How Daniel's dream interpretation is connected to today's vaccine drive and Elon Musk’s injectable neural electrode: Both stimulate and interpret electrical activity in the brain with a hydrogel using nanoparticles of graphene oxide 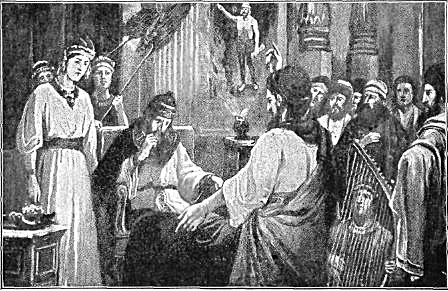 In the Book Of Daniel, chapter 2, in the year 582 BC, Daniel interpreted a dream of Nebuchadnezzar II, the king of Babylon. In the dream, the king saw a gigantic statue made of four metals, from its gold head to its feet of mingled iron and clay; The four metals represented the mighty empires in the history of the world.

The statue had a head of gold which was said to represent Babylon, its chest and arms were silver and represented Media-Persia. The belly and thighs were of bronze and represented the mighty Greek empire. Its legs were said to be of Iron and represented the mighty Roman Empire and its feet were clay and iron and thought to represent the declining Anglo-American period of now.
Nebuchadnezzar's dream continued, a stone from the heavens "not cut by human hands" fell to earth and landed on the feet of the statue which destroyed the entire statue, (this system of things) and the stone became a mountain filling the whole world and becoming Jehovah's Kingdom. Our world today, or this generation is thought to represent the feet of mingled iron and clay but the idea has given many scholars a headache as to what the iron and clay mix could possibly mean. Many religious scholars claim Nebuchadnezzar's dream and Daniel's translation was referring to our problems with unmanageable Left vs Right-wing political system. Still, others believe it points to the world's divided religion which has caused wars and hatred throughout history or the many social divisions which cause hunger and poverty for some and incredible wealth for others.
Feet of mingled iron and clay
Our world is a very complex and complicated world and has become everything Bible prophecy claimed would happen. If we look back at events since the Covid outbreak in 2020 we can begin to understand just what the "feet of mingled iron and clay," may mean something completely different from the religious, political, and social problems mentioned above.
If I can explain, Adam the first human was made by God from the dust of the ground, he was made of the image of God but essentially he was made from clay. So, we can reasonably assume the clay mentioned in Daniel's prophecy is a reference to humans. Secondly, the iron mingled with clay is quite possibly the foolish outcome of mankind's hope to fuze our flesh with electrical technology, namely a neural network.
Elon Musk’s injectable neural electrode, a neural lace, is able to both stimulate and interpret electrical activity in the brain using his invention of a hydrogel using nanoparticles of graphene oxide. When the graphene oxide is charged with a positive electric field the strands of graphene form a web of tiny cables which could then transfer thoughts and memories from the brain to a computer interface or the tiny cables could receive information or orders from the computer.
Yesterday we learned the same graphene oxide is used in all Covid vaccines, full story here. Graphene oxide first and foremost is poisonous to humans. Secondly, graphene is in the vaccines because it is the best heat and electrical conductor there is and can store energy, and is practically indestructible. Graphene oxide can host its own magnetic field and could also store information in Elon Musk and Bill Gates's interface, (neural network) between humans, the internet, or AI as mentioned above.

A long list of experts has now stood together and are warning us of the danger of these vaccines including, Spanish researchers, La Quinta Columna, (biostatistician Ricardo Delgado and Dr. José Luis Sevillano). Karen Kingston, a former Pfizer employee and current analyst for the pharmaceutical and medical device industries and whistleblower. Dr. Jane Ruby, a famed political pundit, and a health economist who has been currently serving at Ruby Health Consulting. Dr. David Martin who is the CEO and inventor of Linguistic Genomics, Dr. Sherry Tenpenny an Ohio anti-vaccinist, and Dr. Mike Yeadon who is an Allergy & Respiratory Therapeutic Area expert with 23 years in the pharmaceutical industry, including Chief Science Officer for Pfizer.

Firstly let me explain how the technology works. Because mRNA vaccines are very unstable, nanoparticle lipids, (a none-viral delivery system) are used to help deliver certain agents to a cell. The vaccines contain 4 nanoparticle lipids. Number 1 is cholesterol which travels easily through the blood, number two is a fossil lipid that adheres to the cell allowing lipid 3 to ionize a charge which penetrates the cell allowing lipid 4, the graphene oxide into the cell.

At the moment the first vaccines have been a trial, rushed through to test out how much graphene people can handle before it becomes toxic and lethal. The first vaccines are a dose-finding study people will be given a booster with more graphene every six months with the so-called, "top-up vaccines!"

When the graphene oxide is given a positive charge a magnetic field is activated in the vaccinated person's body. Graphene is a fantastic conductor of electricity and can host its own magnetic field and could quite easily connect us to the internet and our thoughts could then be monitored on a neural network which would be fitted to the brain, this technology is already out there and is being championed by Elon Musk and Bill Gates and computer giants IBM, to name just a few.

According to IBM, neural networks reflect the behavior of the human brain, allowing computer programs to recognize patterns and solve common problems in the fields of AI, machine learning, and deep learning. Now, with the use of lipid nanotechnology, our bodies could quite easily be monitored through the neural link in our heads along with the graphene electrical conductor, and get this, George Orwell's "thought Police" could be monitoring our every thought, if we had a wrong or bad thought, we could be zapped with an electrical shock. A positive charge could potentially kill a person depending on how much graphene was in the body.

Thank, you and keep safe.