Update on the Icelandic Fagradalsfjall volcano activity: Expansion of the magma dyke is resulting in strong earthquake activity: Earthquakes are happening at the rate of 1 to 5 or more earthquakes every minute. Since 24-February-2021 over 34.000 earthquakes have been recorded by Icelandic Met Office. 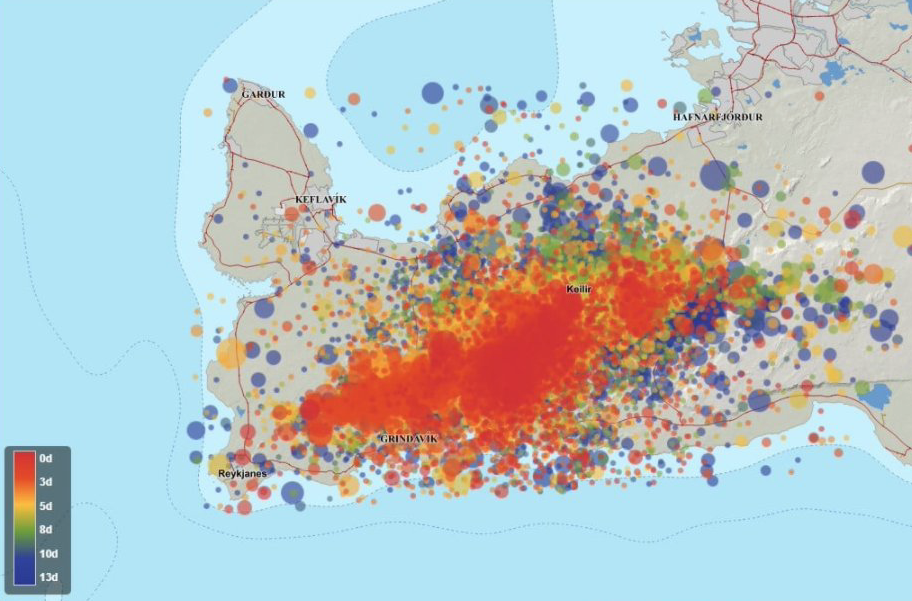 Earthquakes on the Reykjanes peninsula during the past 2 weeks (image: Iceland Met Office)

The Icelandic Met Office (IMO) announced earlier today, that the total number of earthquakes in the region has exceeded 34,000 since the onset of the seismic swarm about 2 weeks ago. For comparison, it had about 3,400 quakes in the whole of 2020, which also had shown elevated activity, while the average during the previous years was in the range of 1,000-3,000 quakes per year, according to Volcano Discovery.

Since Monday 8-March-2021 there has been a lot going on and there are no signs of this activity slowing down. Currently, it seems that the volcano dyke is expanding to the south and that is more into Fagradalsfjall mountain that is an earlier eruption structure from maybe a few million years ago. This expansion of the magma dyke is resulting in strong earthquake activity and during the night the strongest earthquake had a magnitude of Mw5,1 at 03:15 UTC. The second-largest earthquake had a magnitude of Mw4,6 at 08:50 UTC. Over the last 48 hours, 68 earthquakes with a magnitude above Mw3,0 have taken place. Smaller earthquakes are happening at the rate of 1 to 5 or more earthquakes every minute. Since 24-February-2021 over 34.000 earthquakes have been recorded by Icelandic Met Office.