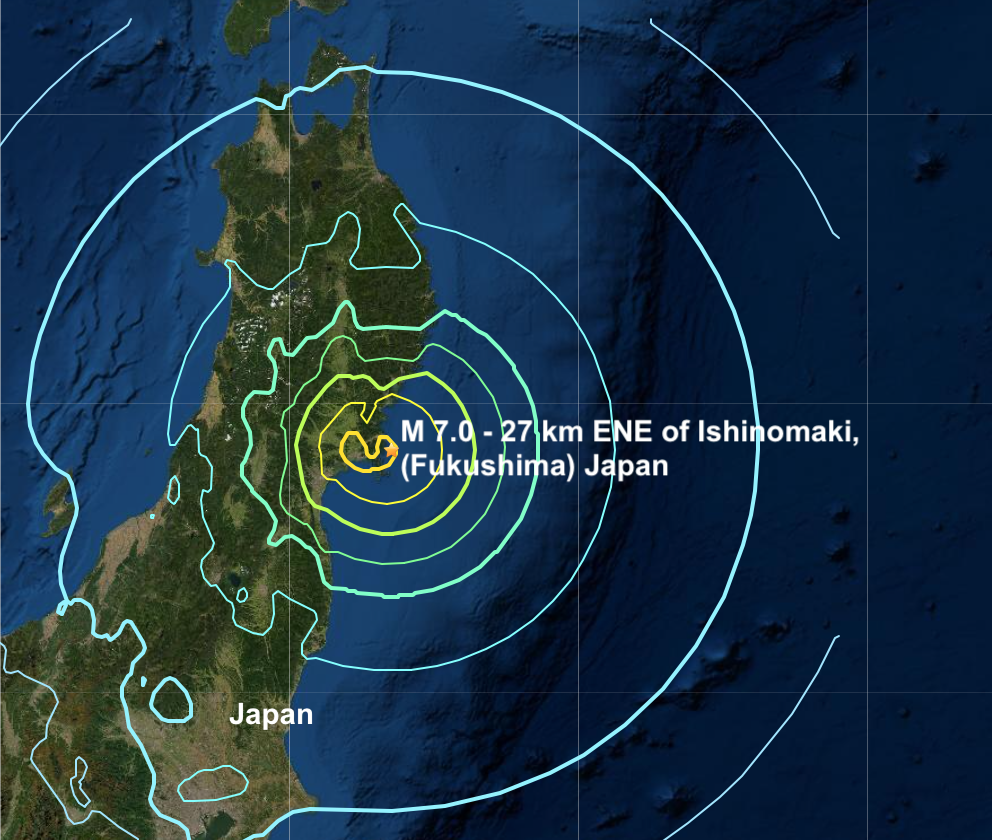 USGS
Ten years ago this month one of the biggest earthquakes ever recorded a mag - 9.1 struck the East Coast of Japan. An ensuing tsunami destroyed the Fukushima nuclear plant and killed 22,000 people. This afternoon a very powerful mag -7.2 reduced by USGS to magnitude - 7.0 rocked the same area with the authorities issuing a tsunami warning. Tohoku Electric Power Co has halted the Onagawa nuclear plant and is checking for any irregularities, NHK said.
There were no immediate reports of damage. (M6.1) west of Macquarie Island, The Japanese quake was the second major quake (mag 6 or higher) of the day after a (M6.1) rocked the Macquarie Island in the South Pacific. This mornings quake was the 18th major quake, mag 6 or higher of March and the 46th major quake of a very impressive year so far.
It has been an incredible weekend for seismic and volcanic activity, earlier in the day A volcano has erupted south-west of Iceland's capital Reykjavik, the country's meteorological office says.

Aerial footage shows lava snaking its way down after the eruption.
In Guatemala - the Pacaya volcano released new lava flows. The effusive-explosive eruption of the volcano continues at high levels. The short phases of lava fountains (paroxysm) continue to erupt from the Mackenney crater at roughly regular intervals. The activity of the summit crater generated a dense dark ash plumes reaching an estimated altitude of 13,100 ft (4,000 m). Volcanic ash is spreading about 30 km to the south and southwest of the volcano. Ejected glowing pyroclastic material reached distance as far as 400 m away from the crater.
Europe's, Etna belched out another lava plume in the latest of a string of spectacular eruptions from Europe's tallest active volcano. The volcano spewed ash and lapilli onto nearby Catania but the eastern Sicilian city's airport was still operational. A southeastern breeze helped take the high and dense column of lavic ash across the city. Lapilli also fell onto a number of smaller towns and villages on Etna's southern slopes including Nicolosi, Trecastagni, Pedara, Aci Sant'Antonio and San Gregorio, where the eruptions rattled windows and doors. The iconic volcano also emitted a fresh lava flow. Volcanology institute INGV said it was the 15th "paroxysm" in Etna's latest phase of volcanic activity, which began in mid February. (ANSA).
Major Quakes
Volcano Eruptions 2021