Here is the latest experiment from our dear friend Bill Laughing-Bear up there in Alaska. Let’s look at vaping but not from the ‘whatever you are inhaling’ juice but from the perspective of EMF’s. 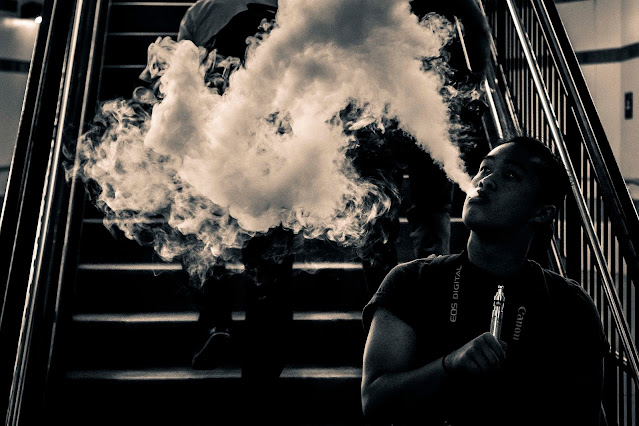 E-cigarette user blowing a cloud of aerosol (vapour). The activity is known as cloud-chasing.Credit [279] micadew from the US - Smoke Screen

Here is the latest experiment from our dear friend Bill Laughing-Bear up there in Alaska.

As usual, I’m dictating to my Secretary (Mom) from Alaska.

With Covid keeping so many out of their normal routine, many have indulged deeper into their habits that can have negative health risks as they try to cope with stress and too much time to kill. Therefore, I want to table a topic but from a totally different perspective. Let’s look at vaping but not from the ‘whatever you are inhaling’ juice but from the perspective of EMF’s.

I remember the first time I ran into a vaper. I thought their pickup truck was on fire. There at a red light in a small community where I occasionally drive for supplies, I dashed up to the rig to pull them from the inferno before it erupted into flames. Yep! I felt a tad out of place standing next to their open window with a look of terror all over their faces as I was placing my hand on their door handle. When I told them I thought their wiring was on fire, they started laughing and thanked me for trying to save them. They hoisted their vapers my way and said they were trying to quit smoking cigarettes. Sheepishly I went back to my rig while others laughed hysterically. I was so grateful the light turned green and I was able to go hide. And just before their rig rolled forward once more, a cloud so thick it blocked their silhouettes floated skyward as their laughter was heard above all the others.

But as I pondered these vapers, this thought would not leave my brain: just how healthy is this? It has to be bathed in Electrosmog.

Last summer on the 25th of July, I got together with one of my closest friends who had a couple of his kids and his future son-in-law, who vaped, over for a cookout. They were more than curious when I asked if I could check out the possibilities their units might be producing Electrosmog. They were all about that. So, out came a couple of my meters. The question we wanted to know and which would soon be apparent was: is there a sinister monster at large, EMF?

Several vape units were brought out for testing that they were presently using or had used in the past. Sometime back I was shocked to find that a small eyebrow trimmer I once owned, until I tested it and found, much to my alarm, it produced 4.6 mG (milliGauss). Now that seems like an insignificant number, but 1.8 mG has been proven to be linked to childhood Leukemia. Gauss is the measurement unit for magnetic fields. Most prudent scientists today recommend that safe exposure for humans to AC (alternating current) magnetic field is 1 mG or less at any single exposure although other agencies recommend 2-3 mG. The earth’s magnetic field measures about 0.5 mG.

The first of the two meters used were the AlphaLab Inc. AC milliGauss meter, model UHS2. This unit is made in the U.S. It is a three-axis meter that measures ELF (Extremely Low Frequency) plus VLF (Very Low Frequency) from 13 Hz to 75 kHz. This meter has a range of 0.01 mG to 199 mG in three ranges. Its accuracy is three per cent from 45 Hz to 5000 Hz.

The second meter was Gigahertz Solutions made in Germany, HF (high frequency) 35C HF-Analyzer. This meter has a range between 800 MHz (megahertz) - 2.5 GHz (gigahertz). This meter would only be used on one vape that was also a cell phone. Yep! You can get your daily dose of Radio Frequency Radiation and a serious case of milliGauss Electrosmog all at once.

Because I do not desire to be sued by the companies that manufacture these vapes, I will not submit their names or the models that I tested. There were a total of seven different units. On each of them, the milliGauss was tested when just turned on and in the hand as well as when in use.

Unit B had a low of 22.56 mG to a max of 25.97 mG. The wattage of this vape could not be located in this unit. But the cell feature was interesting and a faster way to off oneself. Can you say Baubiologie Biology (Germany), or building biology extreme concern? It produced way beyond the 0.1 microwatts centimetre squared that sends out that invisible cloud of death. A great deal, two clouds of death out of one unit! One seen and one unseen!!!

Now please remember that most prudent scientists today recommend that safe exposure for humans to the AC magnetic field is 1 mG or less at any single exposure. I think we have a problem Houston!!! And remember this the next time you decide to pull a long vape:

“All truth passes through three stages. First, it is ridiculed. Second, it is violently opposed. Third, it is accepted as being self-evident” Arthur Schopenhauer.

I’ve been doing a lot of testing on shielding products and clothing for Radio Frequency Radiation and will be sharing my findings soon.

Zapped by Ann Louise Gittleman
Dirty Electricity and Electromagnetic Radiation by Donna Fisher
Electromagnetic Fields A Consumer’s Guide to the Issues & How to Protect Ourselves by Blake Levitt
Wireless Radiation Rescue 2012 by Kerry Crofton, PhD

You are better off with a cigarette.

It's just amazing how all of this "New Technology" that is being mass produced and marketed as the next latest and greatest thing - is just so bad for us (and in this case those around us). Being the 'Conspiracy Theorist' that i am - i think it's all part of the global plan to reduce the world population. Which i can't argue against as we are reaching 'critical mass' - that will only lead to OUR demise and old Mother Nature will start anew once she has got rid of us lice. I wonder what will replace us?? I have no idea, but i'll bet they don't vape!