We could be watching a major event! The tremors are acting like the Great 9.0 Honshu quake in Japan in 2011. Another major quake, mag 6 or higher rattles South East Loyalty Islands, the 6th in the last couple of hours another mag 5+ aftershock too 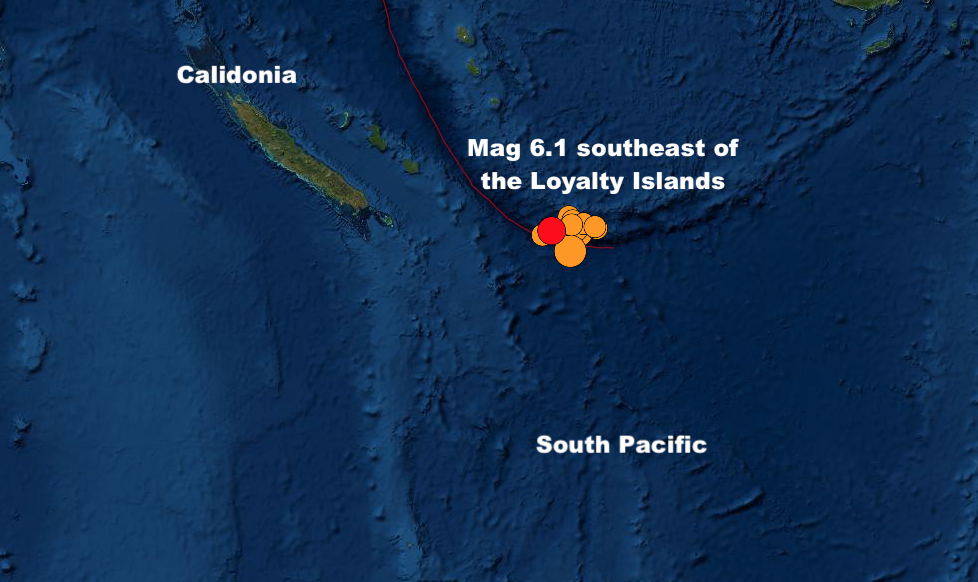 The powerful aftershocks keep on coming. We have now had 5 major quakes, mag 6 or higher,  and 7 aftershocks in the mag '5s.

Seven powerful aftershocks have rattled South East Loyalty Islands just an hour or so after the massive very shallow, magnitude 7.7 struck the same area which preceded three very powerful foreshocks in the Southern Pacific. Another mag 6.1 has just rattled the area making it the 5th major quake to rattle the area this afternoon

The massive, very shallow, magnitude 7.7 has since been reduced to a 7.5 by USGS. A tsunami watch has been issued. The quake’s epicentre was 424 km east of Tadine, New Caledonia and was followed by at least three other earthquakes in the region with magnitudes ranging from 5.7 to 6.1 in a span of just over an hour. The U.S. Tsunami Warning System said a tsunami watch was in effect for American Samoa and that there was potential for tsunamis in other regions including Vanuatu, Fiji, New Zealand according to Reuters.

We are on the cusp of the Galactic Current Sheet. As we switch over to the opposite polarity things are going to get crazy. Leading up to the 12,000 year cyclic mini-Nova. Th-Th-Th-That's All, Folks!