Here we go again! Australia was hoping for a wet summer season with the onset of La Niña but NSW is headed for an early heatwave with temperatures inching toward 50 deg C, (122 deg F) bringing the threat of early start to another wildfire season 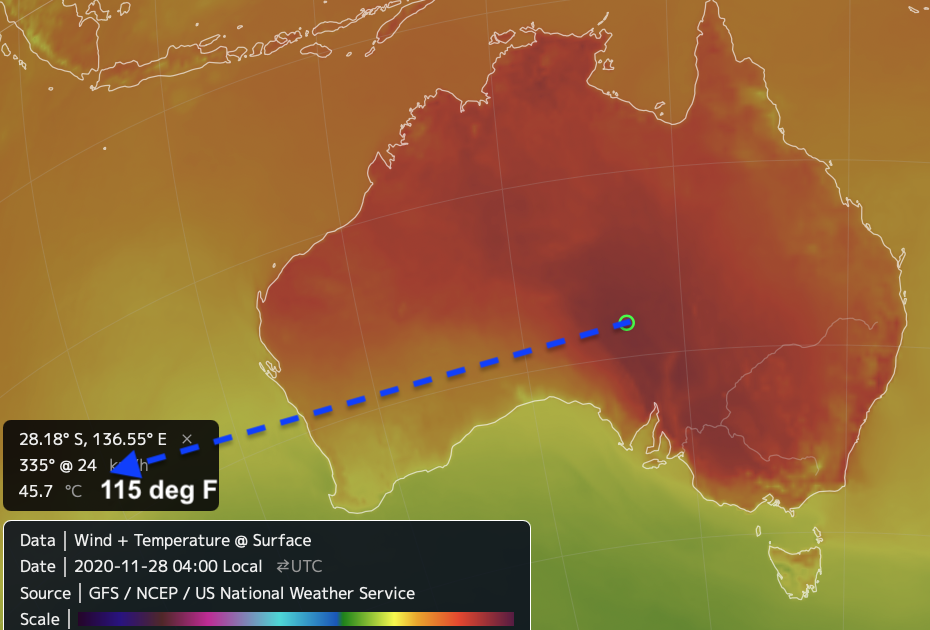 Credit, Earthwindmap
After last year's record-busting heatwaves and wildfire season, Australia was hoping for a rather wet summer season this year with the onset of La Niña.
La Niña is underway in the tropical Pacific. La Niña typically increases the likelihood of above-average rainfall across much of Australia during spring and early summer. However, with Summer still a while away, Sydney temperatures are set to soar over the weekend as NSW is headed for an early heatwave with temperatures inching toward the 50 deg C, (122 deg F) mark bringing with it the threat of another early start to another wildfire season.
Much of inland south-eastern Australia will bake in the first big heat wave of the season, with temperatures in some places forecast to exceed November averages by as much as 15 degrees. A forecaster at the Bureau of Meteorology Gabrielle Woodhouse said heatwave conditions would reach "severe" levels from Thursday in some inland regions as searing warmth sweeps in from the red centre.
With the heat and some wind around, it's "not going to take much" to elevate the fire threat, Ms Woodhouse said. Fire danger risks will reach "very high" for the north-west region on Friday, while the southern and northern Riverina will experience "severe" fire danger on Saturday, the Bureau of Meteorology said. The bulk of the heat will move towards the north-east of the state by Monday, Ms Woodhouse said.
Temperatures in towns like Hay and Cobar will reach 45+ degrees C during the hot spell. Last season's devastating bushfires have left many young people wanting better disaster education. Humid conditions may also make the warmth uncomfortable for many, particularly as overnight temperatures will stay high.