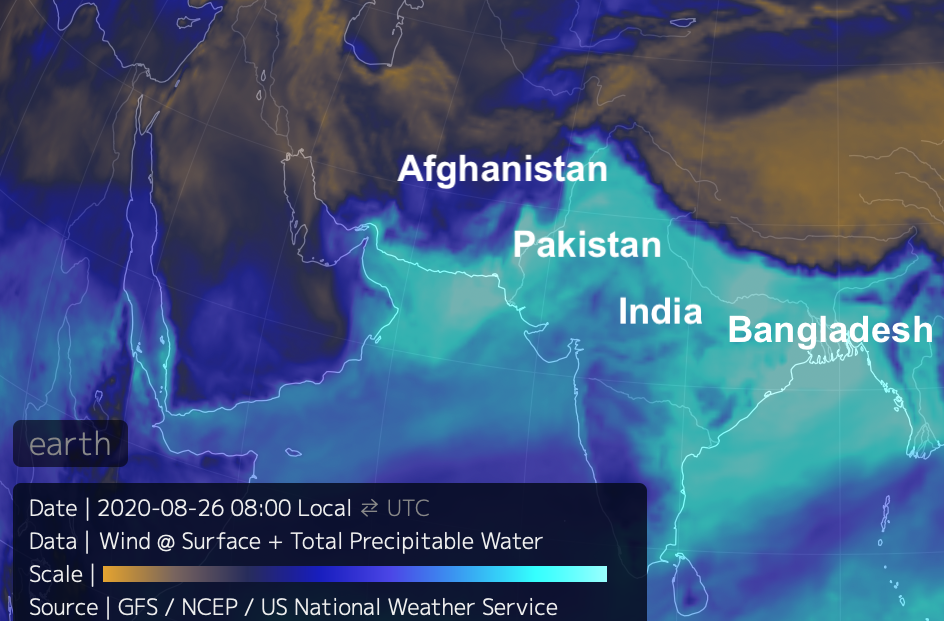 Earthwindmap showing the incredible amounts of rainfall over Indo Pakistan area
The death toll from the recent flash floods in Afghanistan has increased to 151, as search and rescue operations continued in the affected areas on Friday.

The floods hit Parwan, Kapisa, Panjshir, Maidan Wardak, Logar, Paktia, Paktika, Nuristan, Nangarhar, Laghman, Khost and Ghazni provinces, reports TOLO News. The worst-hit province of Parwan has so far reported 93 deaths and 110 injured. According to government statistics, 1,500 houses were damaged in these provinces. Afghanistan’s Meteorological Department has forecast more rains in Nangarhar, Kabul and the Wakhan area of northern Badakhshan province in the next 24 hours. The government has said that relief efforts were also underway. Siasat Daily

Meanwhile, a week of monsoon rains have killed at least 100 people and damaged more than 1,000 homes across Pakistan as no end is in sight from rains which have killed more than a 1,000 and affected millions of people over large swathes of Asia, from Pakistan, northeast India and Bangladesh in recent weeks.

A series of torrential rainfall events have been hitting Western Africa, Indo Pakistan, Bangladesh China and Japan on and off since the beginning of June. More than a thousand people have died and millions have been displaced.
Unusually heavy monsoon rainfall is driving severe flooding over large swathes of Asia, from Pakistan, northeast India and Bangladesh to China, Mongolia, and Japan. Floods have hit nearly 10 million people in South Asia, destroying crops and farmland, forcing evacuations, and killing at least 550 people in Bangladesh, India, and Nepal, according to the International Federation of Red Cross and Red Crescent Societies. In Bangladesh, a third of the land has been submerged, hundreds of thousands are stranded, and more than 500,000 homes have been inundated, the UN reported. More than 100 people have died in floods and landslides in Nepal, where rapid urbanisation has also exacerbated disaster risks. Heavy rains and floods have forced some 2.7 million people in China to evacuate, according to the EU’s humanitarian aid arm, ECHO. Flooding around the Yangtze River basin this year has been “unprecedented”, according to the state-run news agency, Xinhua. And in Mongolia food security is becoming a pressing issue for hundreds of evacuated families after flash floods damaged key arteries, the Red Cross reported. Full story

As the incoming destroyer PlanetX Nibiru gets closer to earth by the day, natural disasters will keep increasing in ferocity and occurrence!,,🪐☄️🙄