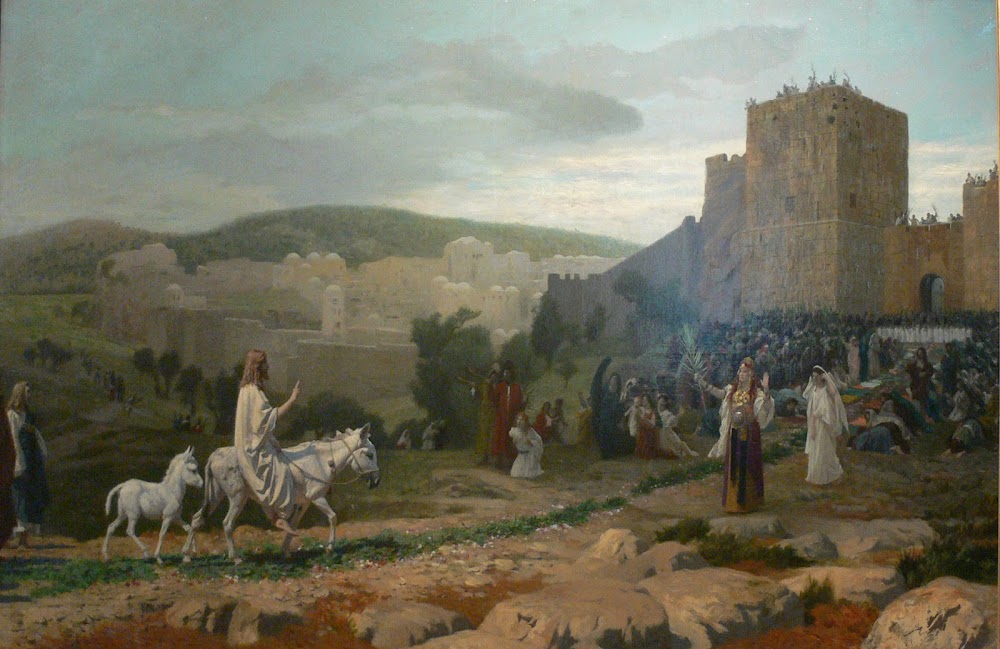 A painting of Jesus' final entry into Jerusalem, by Jean-Léon Gérôme, 1897

It was in the afternoon, while the sun began to withdraw, and the streets of ancient Palestine were filled with people of various national backgrounds, in haggling with merchants and gathering into one massive body of mankind to witness one of the most dreadful criminal acts in the annals of recorded history. On this day, it seemed that every evil force from the bowels of hell was drawn to this city, as the atmosphere overhead was of a gloomy swirl of unnatural timing, as though mother nature had reversed its law of planned unison of order. The world’s devils had gathered in the hemisphere over a once Holy city, in venting its hatred upon the head of one man. The world below had to outcast a broken-hearted man.

Showing up in Jerusalem riding a borrowed ass, this lonely man sat foot. As people faced this strange individual, alone, in plain-dress, meek and humble, neither laughing nor smiling; this was a graceful personality that witnessing souls had never seen or heard of. His countenance was grave, yet peaceful and severe. He strolled the streets of Jerusalem observing his fellow beings being involved with worldly affairs. Rich or poor, high or low, it mattered not to this strange man. His message to the souls centred around the fact that all mankind were the children of an unseen and invisible being.

In that day; there were citizens and tourism that made up a vast community struggling daily for the necessities of life. This stranger talked to small bands of people along the city’s walkways and by lanes. Pontius Pilate was a Roman prefect of Judea. Through political gossip, he heard of the man that talked about another way of life. He and his entourage noticed this same man talking on the street. An inquiry was made. Pilate was told that the individual was an honest man who taught righteousness and kindness to all listeners.

One thousand years earlier, King David was on the throne over all Judea. Through degeneracy, kings came and went. As this good man dismounted the donkey, walking into a wicked generation of a valueless mass of inexplicable mankind. David took the throne and was warned that a nation of the Edomites held Judea in spiritual and slavery bondage. Yes, from the back of a donkey the good man walked into a very diverse community of mankind. Ninety-percent of Palestinians were not of Judean ancestry. Only ten-per cent were born and reared as citizens. The good man showed up in a synagogue. Listening carefully, He spokesmen of many nations in the synagogue are not Judeans. This backed up as to David being warned of global wanderers settling down in the Holy land. Too, he learned that the temple reeled with political harlotry, with a threshold walkthrough lain in corruption.

The good man publicly revealed that He was the Son of God. He denounced the bankers, money lenders, robbery in the temple & more. The Sanhedrin, Supreme Court over all Israel, tried the good man on the charge religious heresy. Standing before Pilate, the good man declared that he came into this world to do the will of his father in heaven. Pilate queried: Aren’t thou a king? The good man stood in grace & remained quiet.

After four trials as night time, one by king Herod

who laughed at the good man. The good man made the only personal epitaph ever put forth towards an individual. He called Herod a fox. The termination was that the good man claimed to be the son of God. All of this took place from the day that the good man gave everything as to his loyalty before His God in Heaven. Not once did he ever asked for anything, or seek goods of this world. He came into this world with nothing and left with nothing.

From a common tree, a cross was to be constructed. The good man was nailed to a tree. Without murmur, comforted by unseen angles, blood ran from the pores of the skin. SUDDENLY! “I THIRST!” Still, HE ACCEPTED NO DRINK FROM DEVILS IN THE FLESH! At the foot of the cross, a sign read: KING OF THE JUDEANS! This good man was Jesus Christ.
Amen
Home Page
at August 27, 2020

The Edomites were descended from Esau, Jacob-Israel’s brother. Esau married Canaanite women and thus broke the first law, which is that each should produce only after their own kind, of only one kind of flesh, not mixing seed with another kind. These wives of his were ‘a grief of mind to Isaac and Rebecca’, his parents. Because he was unrighteous and polluted his bloodline, Rebecca knew that he should not be given the traditional blessing of the first born, and she instructed Jacob on how he could obtain it instead. This added to the jealousy that Esau had for Jacob and continues right through to the present day in the hatred that Jews have for the Europeans.

The tribe of Edom are called the people of God’s curse in the Old Testament, they repeatedly helped Israel’s enemies and joined in the plunder of the Israelites. The first of many wars they made against Israel was following Jacob-Israel’s father Isaac’s death, right after promising him that they would not make war on Jacob’s tribe, referenced in the book of Jubilees.

130 years before Christ was born, there was a final battle with the Edomites whose homeland (Edom/Idumea) was right next to Judea. The Judahites won, but their chiefs had become so estranged from God’s law by then that they thought they could force the Edomites to convert to the Judahite religion at sword point, circumcisions and all.

This is explicitly against God’s covenant with the children of Israel as they are not to take strange wives or to accept strangers into their tribe or religion, especially from the children of Esau. The promises and covenants were made to Jacob Israel and his seed alone, if they married out of their nation then the seed was no longer just of Jacob and the promises no longer applied.

As well as polluting the bloodline and destroying the biological heritage of the Judahites, forcing the Edomites into the Israelite religion meant that they brought strange customs and idolatry into it too, which eventually became the basis for the Talmud.

NO ARK FOR ANERICA---FIRE
In supposition, national government has an unanchored mindset that the present administration is nourishing the theory of absolute isolation. At times, such imagination of political iniquity is not discovered within the Pentagon. The presidency hammers away the fact that imperialism is only a fox-hunt within the Near and Middle East, of which will dissipate when Iran will eventually roll over and play dead. Netanyahu is head hunting for Iran.

Correspondingly, a Combined trio, caucus, Israel, Britain and our grand old republic, America, collusively cultivate global unification of collectivism, to be garnished with an aggregate of cultural, economical and social amenities. International proletarian motivation to revolt shares a mind-set in line with the universal Marxian concept of a world, one-state utopian spinoff alliance. This worker’s icon, hammer and sickle, as a Golan monster, to be spiritualized and globalist political monstrosity representative is to be visualized, a globalist political monstrosity, in line with communism, and I.V.Vladimir Lenin’s premature unveiling of future Bolshevism. The socialists “ First International “ meeting steamed-rolled through decades winding up on the ground floor of the Eastern-End of New York City. Technically; the United Nations Organization is a communist front. The Council on Foreign Relations is a front for communist infiltration.

The Israel of 1948 is a Counterfeit state. It has become a leech and of a parasite on the back of a vultures administration, in league with professional racketeers. Israel is a hock-shop, operation in winding down an impulsive pseudo-intelligent gangsters grip on the back of Uncle Sam. This self-spawning nest of professional criminality palming itself off as a so-called ally of the West, USA, specifically and Indirectly, using congressional panhandlers, in tightening down a pinpointed dedicated drive to destruct Iran through a maze of national news media in the hands of universal printing bandits. Politico/religious gangsterism urges masses of Americans to approve mental slavery and nihilistic temperaments through ballot-box political surgery, in the hands of Lucifer and his agents of Satan. Our state Dept. is a caged animal without a growl, while stringing along the Israeli land-poachers and Assyria religious factions. In the name of pseudo democracy, a fifty-state mob machine, like a lamb, is led to the slaughter, as being fed on the opium of fiat currency. While NATO plants troops into alien soil and the ever expanding free-loading operations here at home; then the conclusion is that illicit invasions and homestead cuddling alien invaders is a revolution on its own. We have troops in one-hundred and forty lands, and fools in national office, in an attempt to ready civil wars and revolt throughout countries.
The destabilization of America runs deeper, as to the communist takeover is near completion. Oil is used to manipulate the pro-communist ruling elite in the District of Columbia. This is a special elite of aristocratic putrefaction being alienated from all fifty-states. These scoundrels are the leading proponents in controlling all state offices, including their appointed presidency. All Near and Far Eastern nations fear and tremble, as drones and stinger-rockets with the inclusion of nuclear weapons hold them in line through fear, while slave-labor and natural resources are imported, become ambivalent as to the GNP. The trashing of American production in unleashing poverty is a well-lain path into the royal arms of incipient communism, Bolshevism, and a One World confederated nest of anti-Christian bastards, of whom nailed our Savior to a tree.

One
THE BEAST
( From Whence )
Adam and Eve went into the land east of Eden to dwell in a cave. This underground chamber was known as the Treasuries'. Adam slept atop this cliff; at times, Eve occupied the interior. Here we pick up the norm of souls as unexceptional personalities as precepting the envisioning the future that angels wrestled with the minds of humankind, as perspicacious creations born as chosen vessels.

Peradventure, thousands of years and in the paths of ancestral Adamites, mankind as today, Homo Sapiens, were to emerge from this chosen lineage into this futuristic existential philosophical mela of Christian historicity. Within this disposition of Christian background children multiplied to be tested of Satan’s whereabouts; and our Lord’s watchful concern just as originally planned. More than likely, Cherubim's guarded the Garden’s entrance. Nachash’s entryway begs the question: no quadrupeds or crawlers. This Nachash was Satan's