Rainfall amounts off the chart! The deluge continues, almost 10 million people have been displaced and 600 dead across a wide spread of Southern Asia as torrential rains continue to cause havoc in the area. 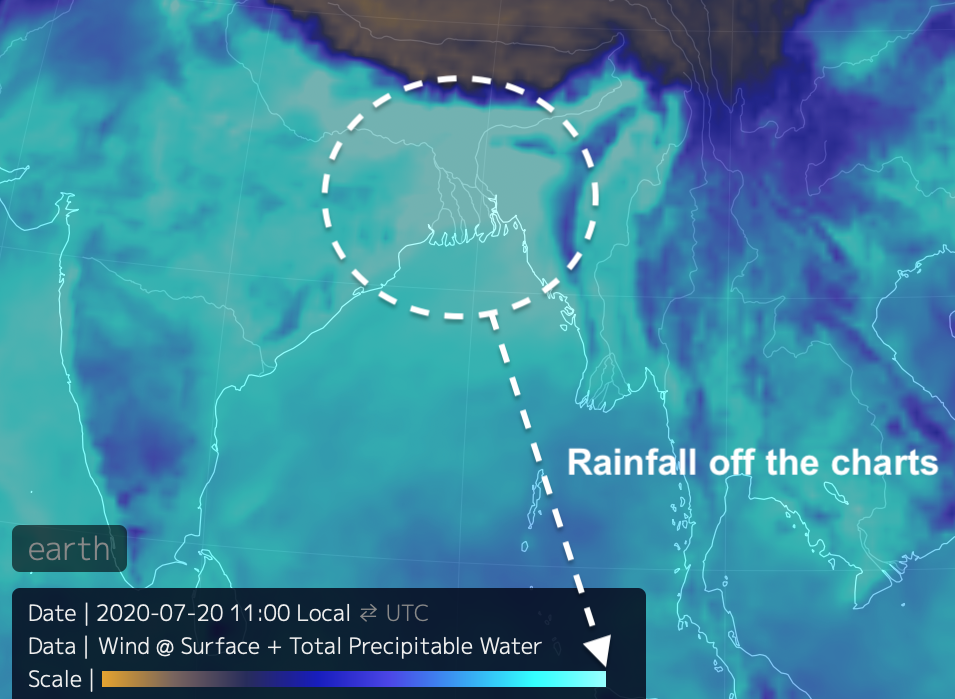 Earthwindmap showing the incredible amounts of rain falling on parts of India, Bangladesh and Nepal.

The deluge continues, almost 10 million people have been displaced across a wide spread of Southern Asia as torrential rains continue to cause havoc in the area. According to a report in The Star Tribune, thousands more are struggling to get food and medicine, nearly 600 people have died in India and Nepal. The International Federation of Red Cross and Red Crescent Societies, or IFRC, claimed a humanitarian crisis can not be avoided, saying that close to one-third of Bangladesh has already been flooded, with more flooding expected in the coming weeks.

It said that 2.8 million people have been affected and that more than 1 million are isolated. In India, over 6.8 million people have been affected by the flooding, mainly in the northern states of Assam, West Bengal, Bihar and Meghalaya bordering Bangladesh, the IFRC said, citing official figures. In India's northeastern state of Assam alone, some 2.5 million people were affected and at least 113 have died, authorities said. M.S. Manivannan, head of Assam's Disaster Management Authority, said many rivers were still flowing above the danger level.