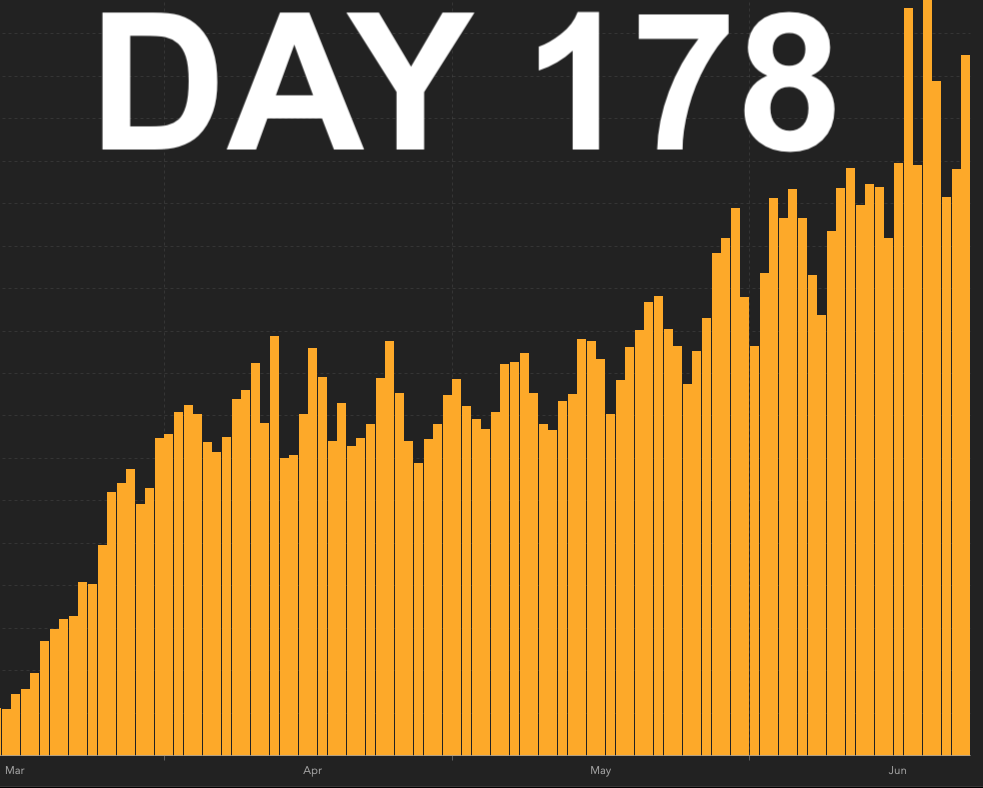 Yesterday, the U.S. recorded its highest single-day total of new coronavirus cases with more than 45,500, breaking the previous April record by an astonishing 9,000 cases. Last Sunday, The World Health Organization reported the largest single-day increase in coronavirus cases by its count, at more than 183,000 new cases, which, is a little bit scary when our governments are telling us all to go back to work and return to restaurants and bars and even book flights to other countries. NEW coronavirus cases in California rose to almost 70 per cent in a period of just two days. Meanwhile, Florida’s new confirmed coronavirus cases skyrocketed by 5,500 Wednesday, a 25% jump from the previous one-day record set last week and triple the level of just two weeks ago. Coronavirus bodies are being stashed in BIN BAGS next to patients in hospitals as the Brazil death toll tops 50,000. A shortage of medical oxygen worldwide leaving many gasping for life is the latest worry in the CV fight.

A week of seismic action

An earthquake of magnitude 6.1 struck 23 km (14.29 miles) west-northwest of Cartago in California on yesterday, however, the U.S. Geological Survey has since reduced the quake to a magnitude 5.8.  The quake was at a depth of 9 km, it added. the area received 170, small to medium aftershocks according to USGS.

The death toll from a powerful earthquake that struck southern Mexico on Tuesday has risen to 10 people, authorities said on Wednesday, as locals began clearing the rubble and assessing the damage from the temblor. The area surrounding the popular Huatulco beach resort in the southern state of Oaxaca was hardest hit by the 7.5, magnitude quake, reduced to a 7.4 by USGS but the shaking could be felt as far away as Mexico City, where tall buildings swayed and thousands of people raced into the streets according to Reuters.

A magnitude 6.0 earthquake, reduced to a 5.9 by USGS, rattled Milford Sound, in the tourist hotspot of Fiordland in New Zealand’s South Island on Thursday, government seismic monitor Geonet said. Thousands of people in the area registered as having felt the earthquake, which was very shallow at a depth of 5km (3 miles), but there were no immediate reports of damage or injuries. On Monday a magnitude 6 earthquake rattled Iceland.

As we approach the halfway point of 2020, a total of 52 major quakes (mag 6 or higher) have been recorded around the world with 8 recorded in June so far.

The Federal Forest Agency of Russia added that during the month of June 2020, emergency managers and related personnel eliminated more than 330 forest fires in 49 different regions of Russia, spanning over more than 27 square miles. As of June 22, six more fires spanning over 81 square miles have appeared in the region of Chukotka, and 66 more in other parts of the country, bringing the total to 72 currently active fires burning across Russia.

450 billion locusts have been killed this year, but devastating swarms still ravage Africa, India and the Middle East

More swarms form in East Africa An increasing number of second-generation immature swarms continue to form in northwest Kenya. The bulk of swarm formation is likely to occur during the next two weeks followed by a decline in July. Before migration, swarms will remain for a short time during which there is a considerable threat to crops and pastures in Turkana and Marsabit counties. Thereafter, the swarms are expected to migrate northwards to the summer breeding areas in Sudan and Ethiopia where they will mature quickly and lay eggs.

Some of the swarms will take about a week to cross South Sudan to reach South Kordofan and South Darfur while other swarms will move north to east and northern Ethiopia. Any swarms in northern Somalia can migrate across the Indian Ocean to the summer breeding areas along both sides of the Indo-Pakistan border. In Sudan, some rains have fallen so far in South Darfur and South Kordofan, and no locusts are present except for isolated adults in the Nile Valley. If the rains are not sufficient, then the invading swarms are likely to continue to eastern Chad and migrate westwards across the Sahel of West Africa. This threat should decline progressively during the next four weeks.

In Yemen, hopper bands are present in the interior and highly mobile swarms are moving in highland and southern coastal areas. Some of these swarms are likely to migrate to northern Somalia and northeast Ethiopia.

In Oman, adult groups and a few swarms laid eggs in the Dhofar Hills of the south. In Southwest Asia, breeding has ended in southern Iran and southwest Pakistan where locust infestations are rapidly declining as a result of control operations and migration to the summer breeding areas along the Indo-Pakistan border. Spring-bred adult groups and swarms continue to appear along the Indo-Pakistan border, many of which have continued further east into several states of northern India because the monsoon rains have not yet arrived in Rajasthan, India. These infestations are expected to return to Rajasthan with the onset of the rains to rapidly mature and lay eggs. Control operations continue in both countries. Sudan, Ethiopia, South Sudan, Pakistan, and India should remain on high alert during the next four weeks. West Africa should continue to take anticipatory measures and preparatory steps. FAO

There are increasing fears for food security in East Africa, with mounting evidence of a new wave of desert locusts. Earlier in the year, billions of the insects destroyed crops across the region – with the UN warning a second generation would be even more destructive. Now, despite international efforts, those fears appear to be coming to pass. When the first wave hit, Albert Lemasulani gave up his life to fight the swarms - leaving his family, his goats and his newborn son behind to try and prevent a plague.

China's Three Gorges dam is in danger of collapse from torrential rainfall which has killed more than 200 people and tens of millions more across 26 provinces in China have been affected by flooding along the Yangtze River.

Sad days ahead, but glorious for true believers in Christ.