Untold billions of animals and marine life have died due to man, disease and pollution in February 2020: Avian Flu, African Swine Fever, algae bloom and greed all a contribution to the carnage 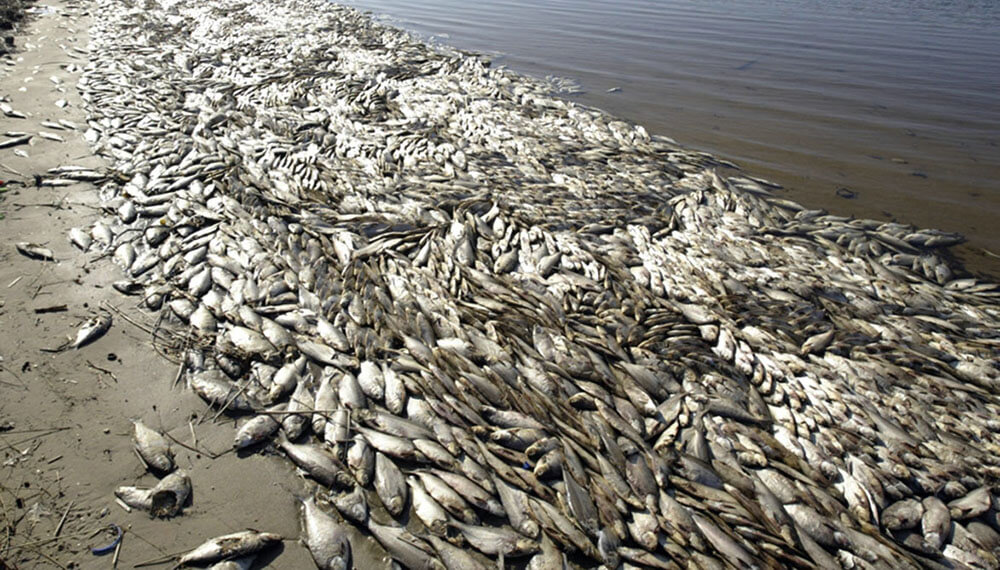 Below is a "small" list, showing deaths of animals killed by disease, pollution or man in the 2nd month of 2020 and let me tell you, I have hardly scratched the surface,  many millions of more deaths don't get reported. As for marine life, most of the dead sink to the bottom, or the birds, die out at sea, so you see, below is just a tiny per cent of the real carnage.

Have you seen any of these disasters on the media? (Apart from the billion deaths of animals reported in the Aussie bushfires). No, it never gets mentioned.

If you get down to the bottom before being sickened, good luck.

Hundreds of vultures have been found dead in Guinea-Bissau over the past 10 days, according to the Vulture Conservation Foundation (VCF). As of 28 February, the known death toll was placed at 648 – and this figure continues to rise in what represents a massive blow to the country's vulture populations. BirdGuides

Vietnam culls hundreds of thousands poultry amid bird flu spread along with 20,000 pigs culled with African Swine Fever: More than 100,000 poultry have been culled in 10 provinces and cities of Vietnam where A/H5N6 and A/H5N1 bird flu broke out. Between January and Feb. 23, the African swine fever outbreak spread to additional 24 communes with 17,133 pigs culled, bringing the total numbers of communes, and provinces and cities hit by the outbreak to 325 and 29 respectively. Meanwhile, the foot-and-mouth disease has hit nine provinces with a total of 2,833 cattle infected and more than 80 dead, the agency quoted the ministry as reporting. Asia and Pacific


Hundreds of Dead Dolphins Wash Up on French Beaches, almost 700 in the first 2 months of 2020. Sputnik

Mexico: Drought has killed hundreds of thousands of fish. The biologist Edwin Flores stressed that what is lived in the lagoon located in Hidalgo is one of the worst ecological disasters in the region that affects fishermen and farmers. Excelsior

Bulgarian Food Safety Agency (BFSA) has registered the first outbreak of avian influenza in Bulgaria for 2020. The National Reference Laboratory has confirmed the highly pathogenic Influenza H5N8 at a duck breeding farm in Rakovski near Plovdiv. At the moment of the outbreak registration, 6.000 ducks. Novinite.com

Spain: Thousands of shrimps appeared dead last Friday on the shore of La Colonia beach, in Aguilas. The image surprised neighbours and visitors who were enjoying a day at the beach when they ran into a trail of about six meters full of these marine decapods. The City Council rules out that there has been some kind of pollution episode or spill on the beaches. Lavardad

Upward of 10,000 birds have been found dead at the Miankaleh peninsula, situated on the Caspian Sea shore in north-east Iran, in recent days.

According to Hossein-Ali Ebrahimi, head of Mazandaran province's department of environment, the corpses involve many different species, including Greater Flamingos, as well as ducks and grebes. bird guides
Hundred of tons of fish die suddenly in Lake Maninjau, Indonesia allegedly due to Sulpher, see below. Sumbar.com


Hundreds of pigs have died from African swine fever in Bali, authorities said Wednesday, marking the Indonesian holiday island's first recorded outbreak and after the virus claimed some 30,000 hogs in Sumatra. Ida Bagus Wisnuardhana, Bali's agriculture and food security agency chief, said nearly 900 pigs succumbed to swine fever since mid-December. "The results are positive for African swine fever," Ida told reporters, referring to tests performed on the dead animals. Phys.org
Almost half a million birds slaughtered in Saudi Arabia due to avian flu Saudi Arabia has reported an outbreak of the highly pathogenic H5N8 bird flu virus on a poultry farm, the World Organisation for Animal Health (OIE) said on Tuesday. The outbreak, which occurred in the central Sudair region, killed 22,700 birds, the OIE said, citing a report from the Saudi agriculture ministry. The other 385,300 birds in the flock were slaughtered, it said. The case was the first outbreak of the H5N8 virus in Saudi Arabia since July 2018. Reuters
Tons of fish appeared dead on the surface of the Vermelho and Araguaia rivers, in Aruanã, Brazil.  Videos recorded by residents show the fish floating in the water. The Environment delegate, Luciano Carvalho, speaks in tons already collected this Monday when the images were more strongly shared on social networks. What calls the delegate's attention is that the fish that appears in the images is the cascudo, a resistant species that is difficult to be contaminated. GloboA city in China’s central Hunan province reported that it had culled almost 20,000 chickens after an outbreak of H5N1 bird flu, the Ministry of Agriculture and Rural Affairs said in a statement on its website Saturday. The statement didn’t say when the outbreak occurred, or when the cull happened. Hunan is next to Hubei, the epicentre of the separate coronavirus outbreak. Avian influenza, found in a farm in Shaoyang City, killed 4,500 chickens, more than half the farm’s flock, the ministry said. The city culled almost 18,000 poultry after the outbreak. The statement said the outbreak was of a “highly pathogenic subtype” of the H5N1 flu. Since 2003, the H5N1 avian flu has killed 455 people worldwide, according to the World Health Organization. Bloomberg

Thanks to these people, whos research goes back to 2011

Behold A Pale Horse! February 2020: The 2nd month of the most important decade in the history of the human race was like a roaring lion: Death, Disease and Disaster Dominate Animal Die-Offs 2020
Front Page

This was most certainly the end we have not much longer,buckl b down and serve the Lord jJesus Chris people, can't you see what's happening it's all in our Bibles people get used to different until he comes which could be in the next five seconds think about that in Jesus Christ name amen