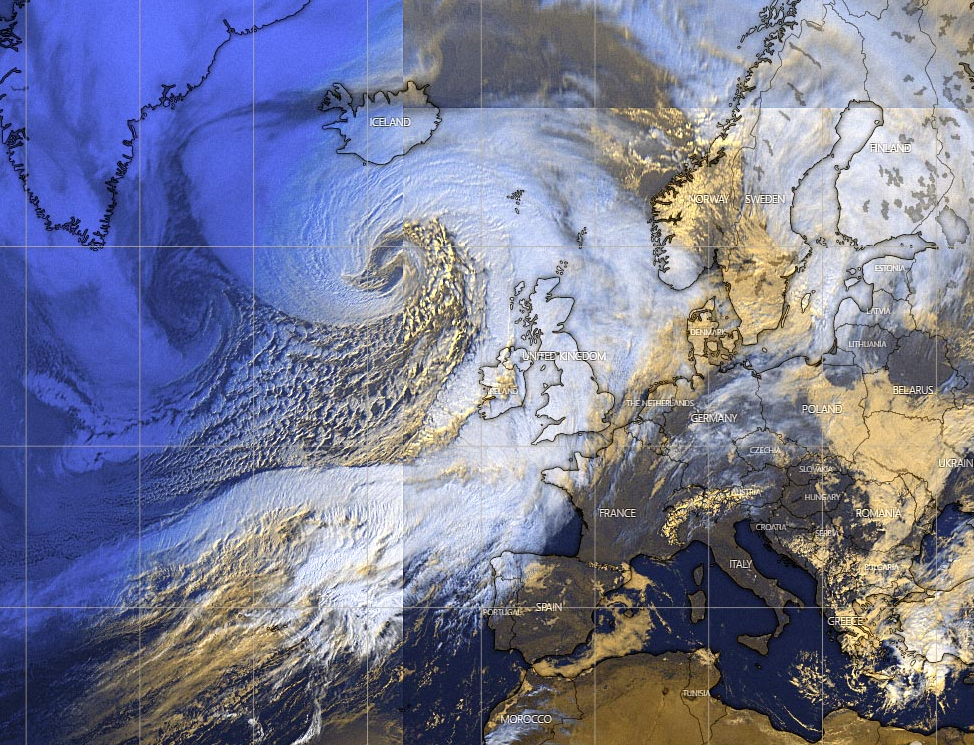 Storm Dennis "The Menace," is rolling toward Ireland and the UK and will bring more flooding for the storm-weary Brits with another month's worth of rainfall this weekend accompanied with hurricane-force winds.

According to Meteorologist Craig Ceecee, Storm Dennis is comparable to a category 5 hurricane, with winds approaching 160 mph,  almost 260 kmh. Thousands of homes are in danger of being flooded in Ireland and the UK this weekend.

The UK is preparing for the second weekend of weather disruption, as experts warn Storm Dennis could inflict more damage than Ciara, which flooded hundreds of homes last weekend. Severe weather warnings are in place for most of the UK - and forecasters say a month's worth of rain could fall in some places. It comes after Storm Ciara flooded hundreds of homes last weekend.

Dennis is actually two storm systems which have joined forces to make Dennis one of the strongest "Bomb Cyclone" ever seen in the North Atlantic.

A powerful cyclone is combining forces with another intense storm currently that has pounded Iceland and Greenland, bringing extreme waves and hurricane-force winds. This storm will take aim at northwestern Europe this weekend, just days after Storm Ciara pounded several countries with high winds and torrential rain and killed at least eight people. Right now, Storm Dennis, named by the U.K. Met Office, has rapidly intensified over the North Atlantic Ocean and is located between the U.K, and Iceland. The other storm is bringing strong winds to Greenland. Storm Dennis has become a bomb cyclone, meaning it rapidly strengthened as it moved across the North Atlantic Ocean. The central pressure in Dennis dropped more than 50 millibars in 24 hours, from 987 millibars early Friday to 936 millibars as of early Saturday. Additional intensification is possible. Weather News

Storm Atiyah: The strong winds caused trees to fall down and led to power outages and some transport disruption during Monday morning (9 December 2019). Large waves were seen overtopping sea walls around many coastal parts of Wales and the southwest of England. There were also some reports of structural damage in Cornwall.

Storm Brendan was the second named storm of the 2019/2020 season. Storm Brendan was a deep Atlantic low-pressure system that brought strong winds and heavy rain to the UK and Ireland on 13 January 2020. Named by Met Eireann, it was the second named storm of the 2019/2020 season. The Met Office issued a yellow wind warning for north-western parts of the UK where winds were strongest, with gusts reaching over 100mph across Scotland’s mountain summits. The strong winds were accompanied by heavy rain across the UK, particularly across western England, Wales and western Scotland where 50mm of more rain fell. In Northern Ireland and Wales, thousands of home lost power and some roads were shut due to fallen trees.

Storm Ciara was the third named storm of the 2019/2020 season. Storm Ciara swept across the whole of the UK on Sunday 9th of February bringing heavy rain and very strong winds. The strongest gust recorded was 97 mph at the Needles, Isle of Wight. However, there were widespread gusts of 70 - 80 mph even in less exposed, inland sites, with a squall band of rain bringing some intense thundery downpours, and strong, squally winds. The highest rain totals were in parts of northwest England and North Wales. Honister Pass, Cumbria (an Environment Agency site) recorded 179.8 mm of rain over the weekend, with 177.0 mm of this coming in the 24 hours up to 16:00 on Sunday. There was widespread travel disruption as well as some localised flooding and trees being blown down. Met Office

Gotta say thanks to the big wobble for all the great reporting in the past years. Not enough said..

Video: Left part of the storm system, West of Greenland: Rectangular corner (as in several other pics/storms); this is not natural. But likely the result of 'climate engineering'

GeoengineeringWatch.org explains how these things (incl. chemical ice nucleation, aerosol injections, microwave manipulation of weather patterns etc.) work. They are experts there, I am just a student who wants others in school learning.

have these monster storm bombs, the big wobble's occurred in the recorded past or is this something new?

Apparently, this is only the second most intensive storm si=o it is not unique