Warm waters have enhanced unseasonal downpours across Kenya killing 150 people since October 2019: 100,000 have been displaced: Unprecedented locust invasion eating what crops are left 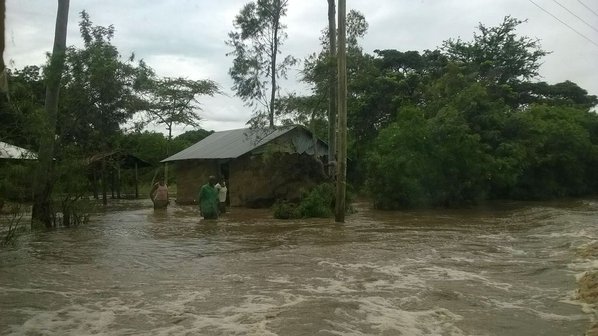 Photo: KRCS
Flooding in western Kenya has displaced hundreds of people in Homa Bay County and paralysed transport in Turkana. According to local media, 117 families have been displaced by flooding from the Kuja and Oyombe rivers in Ndhiwa, Homa Bay County. The flooding came after a period of heavy rain that began around 26 January 2020.

Homes and crops have been damaged and a bridge over the Oyombe river destroyed. About 200km east of Ndhiwa, flooding caused damage in Narok Town in Narok County on 26 January. Also in Narok County, floodwaters from the overflowing Talek river have left tourist areas of the Maasai Mara National Reserve isolated. Further north, flooding has affected parts of Turkana County after the Kawalase river broke its banks. Local media said the flooding has paralysed transport around the towns of Lodwar, Lokichoggio and Karakol.

Devasting floods caused by a weather system known as a "positive Indian Ocean Dipole have been hitting Kenya hard since 2018. Warm waters have enhanced unseasonal downpours. Recent rains in Kenya have affected more than around a quarter of a million people since the onset of the rains in October 2019, according to the Kenya Red Cross Society (KRCS). Around 150 people have reportedly died, including dozens who lost their lives after a landslide in West Pokot County on 23 November. KRCS said that nearly 100,000 who are displaced countrywide, including 10,000 in West Pokot County. According to the Kenyan government, 16,000 houses have been destroyed across the country. FloodList

To make matters worse swarms of locusts are sweeping across Kenya and is likely to grow 500 times bigger by June. The plagues are hitting the East African region where food insecurity has already reached record levels following unprecedented droughts and in some areas flash floods and millions more are at risk to go hungry unless these swarms are immediately controlled, warned Oxfam today. The Big Wobble