Thousands of protesters have taken to the streets in Iran's capital: "Death To The Liars." Iran Arrested And Detained UK Ambassador As Protests Hit Tehran: Israeli intel helped the US 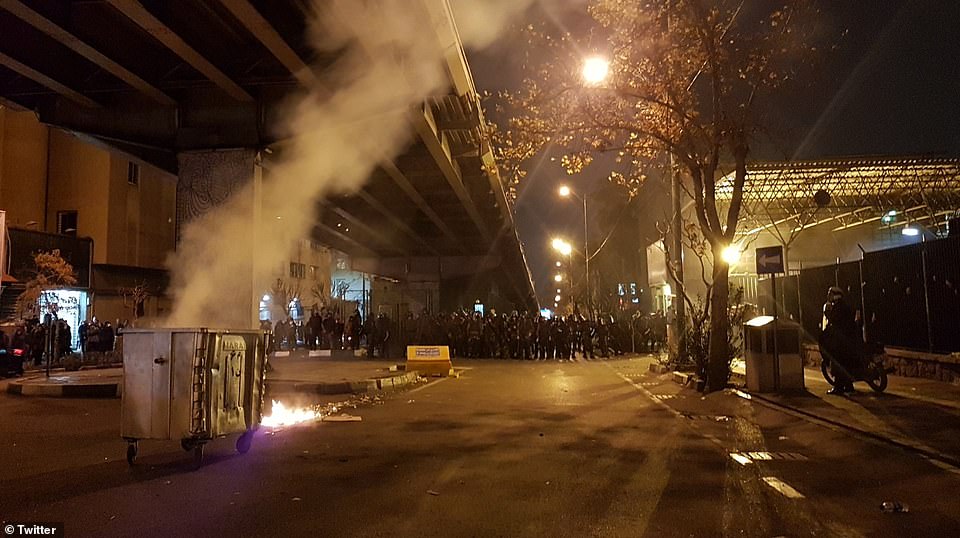 Hundreds (or thousands?)of protesters have taken to the streets in Iran's capital, Tehran, to vent anger at officials, calling them liars for having denied shooting down a Ukrainian passenger plane. Protests took place outside at least two universities, with tear gas reportedly fired. US President Donald Trump tweeted support for the "inspiring" protests.

Iran on Saturday admitted downing the jet "unintentionally", three days after the crash that killed 176 people. Ukraine International Airlines flight PS752, en route to Kyiv, was shot down on Wednesday near Imam Khomeini Airport in Tehran shortly after take-off, and only hours after Iran had fired missiles at two airbases housing US forces in Iraq. BBC

"Death To The Liers."

Iranians have gathered in the streets of Tehran to demand the resignation of Ayatollah Seyed Ali Khamenei after the regime admitted it had mistakenly shot down a civilian passenger plane. Angry crowds gathered on Saturday night in at least four locations in Tehran, chanting 'death to liars' and calling for the country's supreme leader to step down over the tragic military blunder, video from the scene shows. What began as mournful vigils for Iranian lives lost on the flight soon turned to outrage and protest against the regime, and riot police quickly cracked down, firing tear gas into the crowd. 'Death to the Islamic Republic' protesters chanted, as the regime's security forces allegedly used ambulances to sneak heavily armed paramilitary police into the middle of crowds to disperse the demonstration. DM

Following the brief detention of Her Majesty’s Ambassador to Iran Rob Macaire, Foreign Secretary Dominic Raab said: "The arrest of our Ambassador in Tehran without grounds or explanation is a flagrant violation of international law." "The Iranian government is at a crossroads moment." " It can continue its march towards pariah status with all the political and economic isolation that entails or take steps to deescalate tensions and engage in a diplomatic path forward." GOV.UK

Israeli intelligence was instrumental in the successful US assassination of the head of Iran's Islamic Revolutionary Guard Corps (IRGC) Quds Force, Maj.-Gen. Qasem Soleimani, NBC News reported. Soleimani wielded immense power and influence in his position as head of the IRGC's Quds Force and was crucial as the architect who spread and maintained Iran's influence in Lebanon, Syria, Iraq, Yemen and elsewhere in the region through acts of terrorism. JP

I have a question about news information sourcing. For example, the above article states, "Thousands of protestors have taken to the streets in Iran's capital....." At the conclusion of the two-paragraph introduction, the BBC is cited as the source and a link takes you to a BBC article summarizing the protests; however, the only reference to crowd size was this, "Hundreds of protesters have taken to the streets in Iran's capital, Tehran, to vent anger at officials, calling them liars for having denied shooting down a Ukrainian passenger plane."

Hundreds of protestors reported by the BBC while this article claims thousands. Perhaps this is due to an inadvertent error in reporting. Let's hope so.

So the Jurelseum Post is claiming Isreali intelligence helped in the assassination of Soleimani? That's funny. Soleimani was visiting Iraq on a previously announced formal state visit, which explains why his Iraqi counterpart was also killed in the missile strike as the motorcade left the international airport.

It would be as if the US Chairman of the Joint Chiefs received an invitation from the UK to attend meetings with high ranking UK military officials. After flying into London's Gatwick Airport, the chairman was greeted by his UK counterpart and while departing Gatwick the Iranians launched a missile killing the Chairman of the Joint Chiefs along with other high ranking UK military officers.

Well not really, I watched many videos and read many reports before posting and it is clear to me the numbers of protesters added to thousands, not hundreds

Isn't it true that the US and its allies are often happy to help incite uproar against governments which they want to have removed?

The current as almost any past 'gloating US president' is a happy fellow as his agencies and puppet masters keep the US civilization on such a short leash (economically, legally, information-wise/censorship, spy-wise/think NSA/FBI/... etc reading everything you or I write or say etc.) that any justified unrest in the US is prevented and or dispersed before it can actually happen.

According to reports, the Iranian commander gave the order to shoot down the plane which he perceived as incoming rocket, because he had troubles communicating with the command center which could have identified the object correctly. Isn't it almost clear to assume that the Iranian communication systems were interfered with by Iran's long-standing foreign adversaries. Which would have made the gloating possible.

1/10/20 Military.com "Iran denies missile hit plane calls on west to share data". The plane went on fire right after takeoff. That first report has been swept under the carpet. A missile hit doesn't ocurr upon take off from a runway and a plane doesn't go on fire during takeoff from a missile hit, it would have blown up immediately not been seen with the wings on fire first.


1/10/20 Mintpressnews.com " The spin war" - Study finds Bots and MAGA supporters pushing #IraniansDetestSoleimani Hastag
A social media disinformation expert studied 60,000 tweets from nearly 10,000 accounts using the hash tag #IraniansDetestSoleimani and found that the most common phrases in those biographies were, "make america great again" and "Trump".
Those who were most vociferously voicing their opposition to the recently slain general all had typical machine generated usernames, extremely generic profiles, and little personal data and default on their pages.
This is an increasingly common occurrence in conflicts these days, as groups attempt to control the narrative on the new online battlefront to shape public opinion.

Prior to this assassination, trump was good buddies with this general, he did help remove ISIS from Irag and Syria, but now he is so evil and ISIS is praising trump, writing online - Thank God for Trump!
This is good? Be careful folks. You're being manipulated and your memories are being disabled.