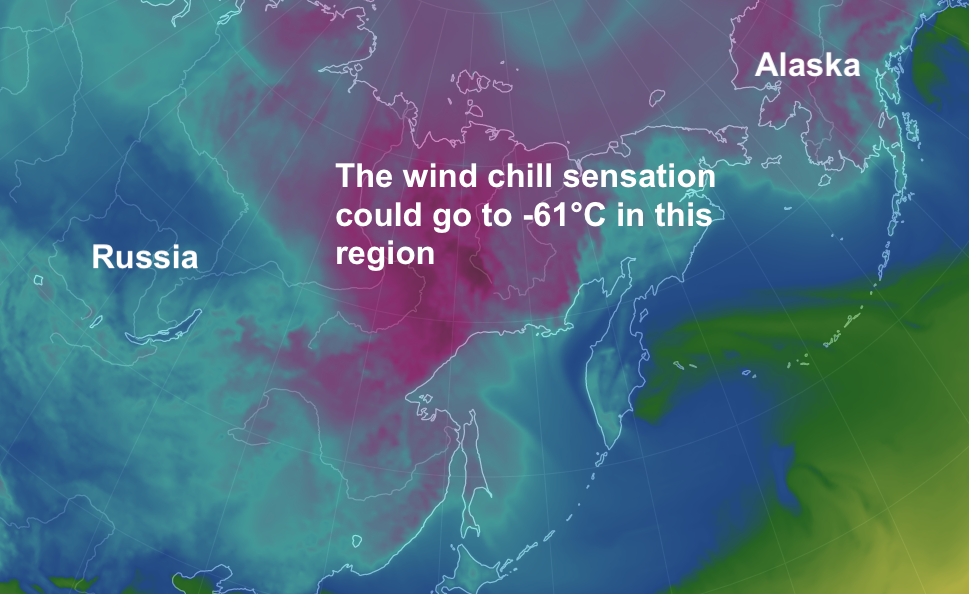 Not much ice will be melting a -56C (-68.8F). Every day of the past week in the Magadan region the frosts grew stronger, and over the past day, the air temperature dropped below the norm by 8.5 degrees. But in continental areas, temperature set new records. In the village of Talon, on January 24, the temperature dropped to -46.2C (-51.1 F), which is 0.2 degrees below the previous record set in 1978. But these are not the lowest temperatures in Russia. In the east of Yakutia last night, frosts intensified to -56C (-68.8F). ‘The wind chill sensation could go to -61°C in this region.’ Ice Age Now

Thanks to Martin Siebert for this link

If it were natural it might be a record setter, but it is geoengineered cold so not really a record low temperature set by nature. Look to the right of this thumb nail image, green next to purple!The geo line is always very visible as this is too, and if the screen shot was larger we would really get the picture of truth!
This is a man made cold record setter. You would think that the arrogance behind these insane cold snaps would love recognition and praise. Why don't we give it to them and then the truth can come out of the closet!
They are freezing us here in FL again. Three cold fronts this week alone. Hello!!!! Anybody awake out there????!!!

Here is the bigger image https://earth.nullschool.net/#current/wind/surface/level/overlay=temp/orthographic=-181.00,64.08,604

And below is the reason, an erratic jet stream which has been causing freak weather in the northern hemisphere all last year, causing record flooding in the US record-busting temperatures in Europe in the summer and wild cyclone activity in the Atlantic and Pacific. You are now going to tell me the erratic jet stream is geoengineering? Well, what would be the point, the whole Northern Hemisphere has suffered, what kind of weapon is that?

The purple is a huge low-pressure system stopping the high pressure from moving, we have just had the same scenario in Europe a couple of weeks ago only the high-pressure system brought unusual warmth from North Africa

The thing is that climate engineering has been into our face for so long and has been decried as conspiracy for so long, that even smart people can't see what is happening. Others are unwilling to even look at the facts; others feel overwhelmed by the disturbing information so they stop looking.

All the time, cloud seeding, weather modification incl. chemical ice nucleation by the rich/er and/or military-strong nations succeed in further dividing the population on the existence of intentional climate engineering and its consequences.

Anybody who wants to get a good overview about what is going on in fact and not just theoretical proposals should check out the data, satellite images, expert interviews and data on www.GeoengineeringWatch.org

Geoengineering happens here on Earth for sure but is minuscule as to what the space race has done to our atmosphere http://www.thebigwobble.org/2020/01/connecting-dots-christmas-1957-our-sun.html

It's hard to tell the effects of geoengineering on our weather. One thing IS FOR CERTAIN, the solar minimum (low or no sunspot activity) has been directly linked to cold temperatures on Earth. We are in a very low period of sunspot activity right now. The last time this happened (Maunder Minimum) we had a mini-ice age.

Gary, what is it going to take for you to admit it? The longer you (and others like you) deny the reality of climate engineering, the longer it is going to take to expose it and then finally stop it. Either include all factors creating events like one mentioned in this write up, or just don't talk about it at all. Otherwise, incomplete reporting creates more harm then good. You can save your excuses, you've got none!

Not sure where you get geo-e happens on Earth , but is minuscule , (what???) as to space race to atmosphere> take a look at link on photo gallery, the 3 min. vid of caught on camera( 3 jet squadron) and look at tab "Jet Spraying". https://www.facebook.com/geoengineering.watch.photo.gallery/ Consider his site as world's largest repository of proof, evidence, patents, Senate documents, pics & film footage, the whistleblowers, lab samples and more! All must wake up to REALITY! I hope you are not a paid off shill Gary. One glance through Dane's site is stunning EVIDENCE as anything but minuscule. It's pervasive and has been for 70 yrs plus! Day and night . High and Low. All nations have involvement in this dark Agenda. many wonder what is dumped (no consent) upon innocent civilian/ citizens. Bio warfare seems next phase to depopulate . Vaccines and gun grab not fast enough? There is no such thing as a " safe space".

Gary, you really should go listen and read Danes site because you are making too many excuses, and as another here said excuses are never going to get the truth out and we need truth in this world. Truth and love are all that can save us now!
The things you point out in debate against climate engineering are the things being manipulated! You make no sense because of that fact and it is why you need to learn more about it. The high powered frequency towers involved move jet streams. They put high pressure in place - microwave heat = dry high pressure. Its a wall, invisible wall that acts to steer other systems and jet streams.
Do you really believe the summer hurricane Dorian that demolished the Bahamas was a natural occurrence when that cat5 storm suddenly stopped dead in its tracks 200 miles off FL's east coast!!?? For 36 hours it was "stuck" in a holding position! If that didn't convince or wake you and others up about geoengineering operations in play then sorry but you guys are hopeless fools.

While I am not a believer in global warming/man made climate change, I noticed the article starts out claiming:
"Not much ice will be melting a -56C (-68.8F)" which gives the impression that they 2 numbers are equal. But 56 degrees Celcius converted to Farenheit is 132.8 degrees - doesn't matter whether you are going hot or cold.