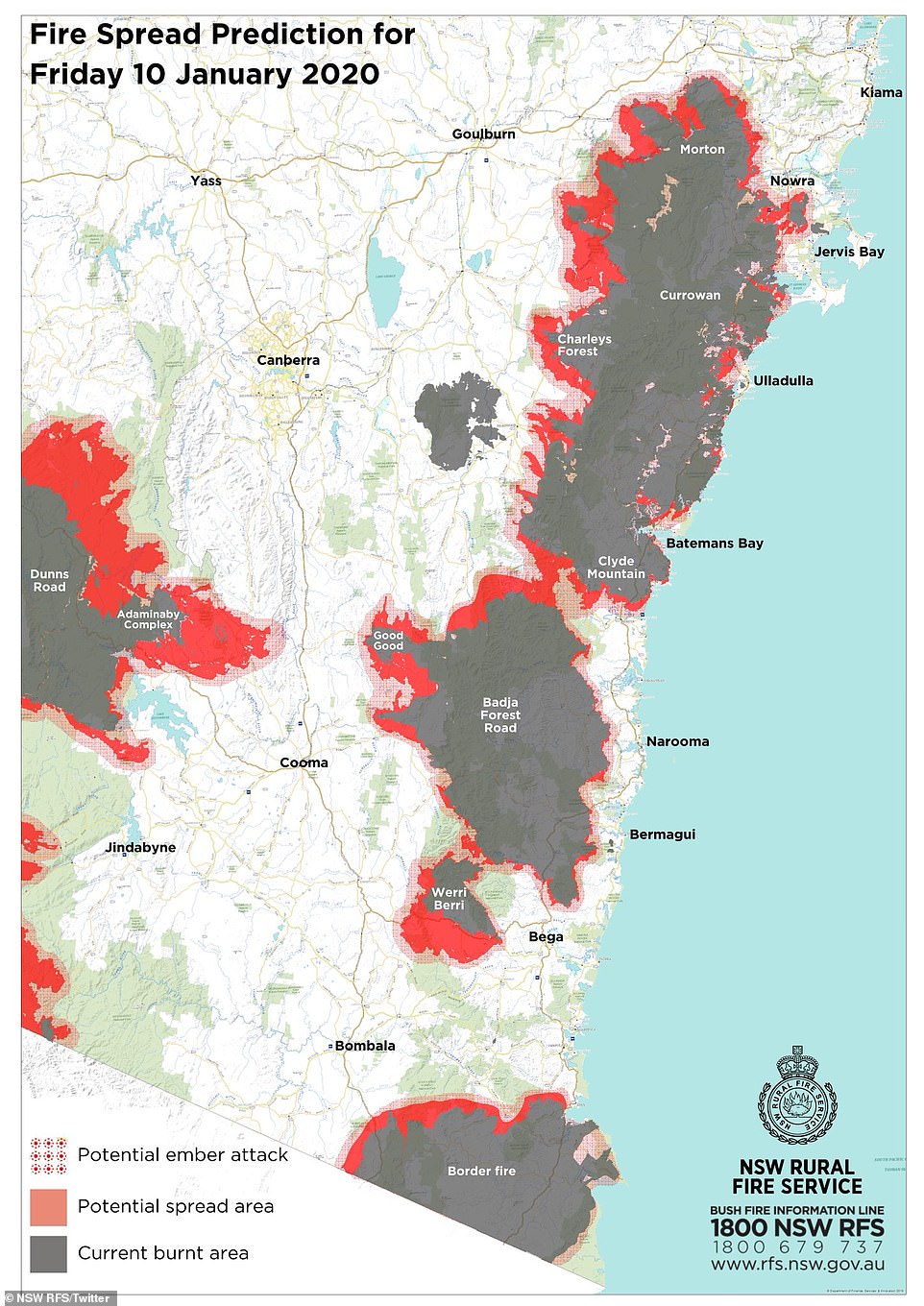 "Mega-Blaze," the expected merger of two out of control fires in Victoria and New South Wales happened tonight spanning half a MILLION hectares as heatwave sparks emergencies across several states

Two giant bushfires in the south of New South Wales and Victoria have merged into a terrifying mega blaze. The East Ournie Creek and Dunns Road fires near the Victoria border were upgraded to watch and act level this morning. But by lunchtime, they had merged as temperatures hit 37C and 20kmh winds fanned the flames. Together with the blazes, including sections that have burnt out, cover half-a-million hectares - about five times the size of Canberra. The Rural Fire Service forecast extreme danger for the foreground today and warned of 'erratic behaviour' meaning the flames can move and change direction quickly. The fire has already passed through the towns of Talbingo, Wondalga, Kunama and Batlow. Residents in Goobragandra Valley, Brindabella, Mundaroo, Ournie, Mannus and Tooma have been told to keep watch and prepare to evacuate if necessary. 'If you are in the area south of Tumbarumba to Khancoban, and west of the Kosciuszko National Park, you should leave early. Do not be in the path of these fires,' the RFS website says. Daily Mail

Two of Australia's bush fires are likely to merge into a so-called "mega blaze" on Friday evening, authorities have warned. The merger is expected at the border of New South Wales and Victoria and has been feared for days. Prime Minister Scott Morrison warned Friday would be "a difficult day in the eastern states" amid forecasts of heat, strong winds and dry lightning.

A spokesman for the New South Wales (NSW) Rural Fire Service told the BBC the merger of two fires - both of which are out of control - was "imminent" and expected at about 8pm (09:00 GMT).

What happened on Kangaroo Island?

A town on the island in South Australia spent the night cut off by bushfires as the weather whipped up the most significant threat for almost a week. Erratic winds on Thursday had amplified a blaze which isolated the island's biggest town, Kingscote, from roads. The crisis has also taken a vast toll on wildlife. An estimated 25,000 koalas were killed when flames devastated Kangaroo Island last week. Authorities have warned that the huge fires, spurred by high temperatures, wind, and a three-year-drought, will persist until there is substantial rainfall. High temperatures and strong winds were expected to fan massive bushfires blazing across southeastern Australia on Friday, as authorities issued new emergency warnings after several days of cooler conditions brought some reprieve to affected communities. BBC

Thousands of firefighters were preparing for the worst with temperatures expected to soar above 40 degrees Celsius (104 degrees Fahrenheit) in parts of New South Wales and Victoria states and with a late southerly change forecast to bring damaging winds.

The conditions are difficult today. It's the hot, dry winds that will prove once again to be the real challenge," New South Wales Rural Fire Service Commissioner Shane Fitzsimmons told reporters."We are going to see winds coming through around about 35-50 kilometres per hour (around 20-30 miles per hour), gusting up to 70-90 (kilometres) an hour, in some areas... and we are going to see that through most of the day." New South Wales Premier Gladys Berejiklian said there were more than 130 fires burning in the state, with just over 50 not yet under control. In neighbouring Victoria state, evacuation orders were issued for some areas near the New South Wales border over an uncontained blaze. Officials in Victoria on Thursday had extended a "state of disaster" declaration for a further 48 hours ahead of Friday's forecast of scorching temperatures.

On Kangaroo Island off South Australia state, the largest town was cut off as firefighters battled out-of-control infernos, forcing some residents to flee to the local jetty. The catastrophic bushfires have killed at least 26 people, destroyed more than 2,000 homes and scorched some eight million hectares (80,000 square kilometres) - an area the size of Ireland. University of Sydney scientists estimate one billion animals have been killed in the fires. The figure includes mammals, birds and reptiles, but not frogs, insects or invertebrates.

The severe fire conditions have been fuelled by a prolonged drought and worsened by climate change, with experts warning that such massive blazes were becoming more frequent and intense. Australia experienced its driest and hottest year on record in 2019, with its highest average maximum temperature of 41.9 degrees Celsius (107.4 degrees Fahrenheit) recorded in mid-December.