2019 was officially the 2nd hottest year on record for Earth: The world’s five warmest years have all occurred since 2015 with nine of the 10 warmest years occurring since 2005 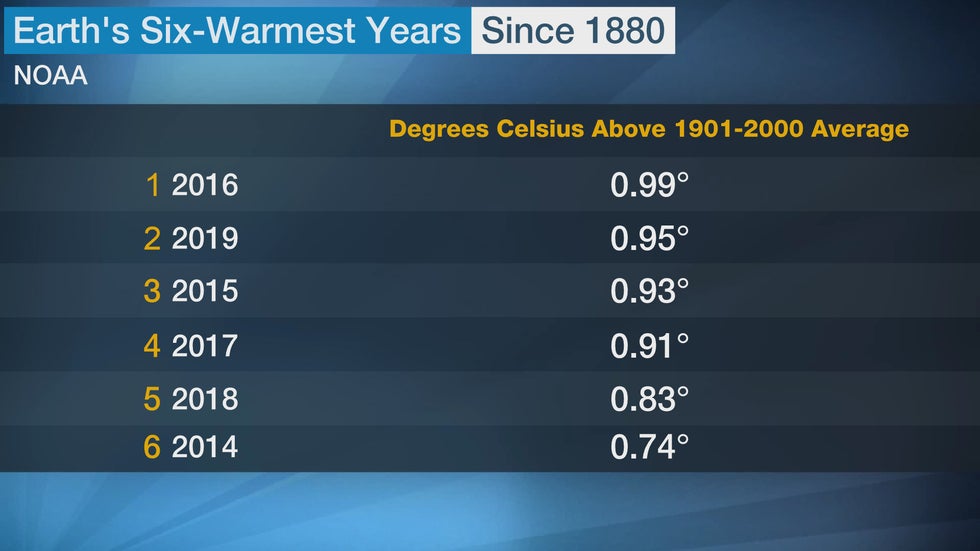 NOAA
If you come from my part of the world, Europe, this news will not come as a shock, this summer the heat was sometimes, intolerable and as we enter into the second week of January winter has yet to arrive, 2019 was incredibly warm, not just Europe, Alaska recorded astonishing warm temperatures throughout 2019 as did, of course, our friends down under who are this moment tackling unprecedented bushfires due to record heat and drought conditions. The U.S. is maybe a little shocked at the results as it suffered its 2nd wettest year on record in 2019. They also experienced a14 billion-dollar weather and climate payout: It was officially the worst agricultural disaster in modern-day history for the Americans.
This animation shows monthly global temperatures compared to the 1981-2010 average for January through December 2019. The last slide shows the departure from average for the entire year. (NOAA NCEI and NOAA Climate.gov)


The average temperature across the globe in 2019 was 1.71 degrees F (0.95 of a degree C) above the 20th-century average and just 0.07 of a degree F (0.04 of a degree C) cooler than the 2016 record. Ocean heat content, which describes the amount of heat stored in the upper-levels of the ocean, was the highest ever recorded. High ocean-heat content can contribute to sea-level rise.

2019 as ranked by other scientific organizations

NASA scientists, who conducted a separate but similar analysis, concurred with NOAA’s ranking. NASA also found that 2010-2019 was the hottest decade ever recorded.
Scientists from the United Kingdom Met Office determined that 2019 was one of the top three hottest years on record, and the World Meteorological Organizationoffsite link also ranked 2019 second warmest for the globe. More NOAA findings for 2019 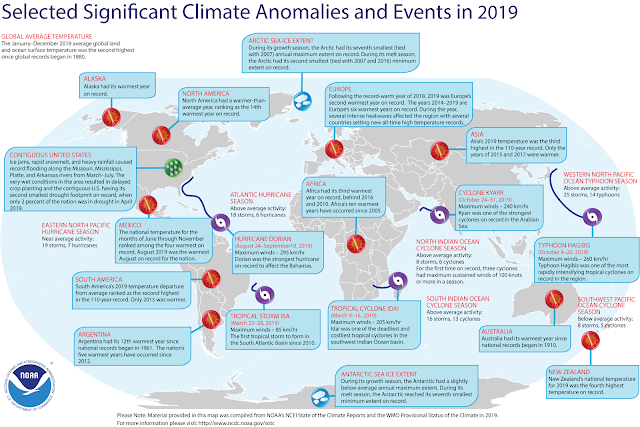 Click on image to read, A map of the world noting some of the most significant weather climate events of 2019. For more details, see the bullets below in this story and at http://bit.ly/Global201912.
More > Access NOAA NCEI’s 2019 climate report and images, as well as this data visualization from NOAA Climate.gov.