Sydney under siege! "Only flooding will put this fire out," no meaningful rainfall until late January, leaving 5.5 million people chocking in 40 degrees Celsius (104 Fahrenheit) temps 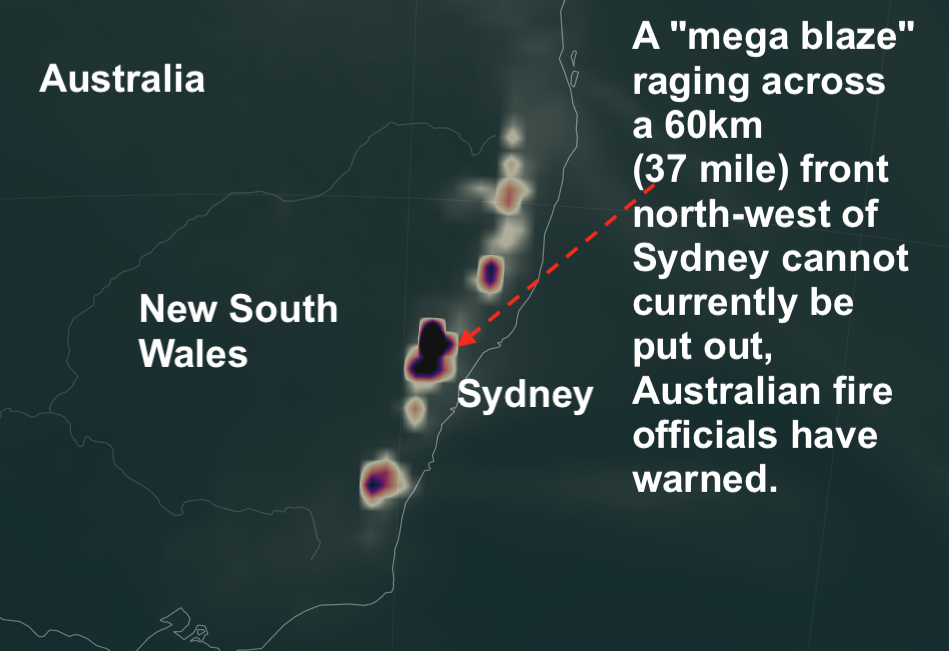 A giant bushfire on the edge of Sydney, which has blanketed the city in smoke causing a spike in respiratory illnesses and the cancellation of outdoor sports, will only be extinguished with heavy rains, firefighters said. Thousands of weary firefighters, who have been battling bushfires for a month, were on Saturday fighting nearly 100 blazes in New South Wales state. The mega-fire north of Sydney, Australia's largest city with a population of 5.5 million people, was created on Friday when several fires merged and was now burning across 335,000 hectares (830,000 acres). 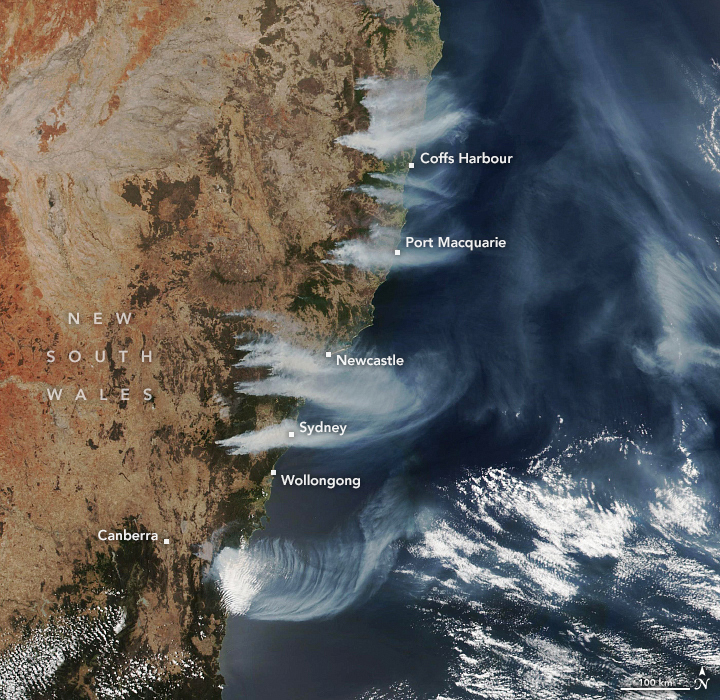 "We need flooding rain to put these fires out. That's really what is going to stop it," said the New South Wales Rural Fire Service. "These will take many weeks to put out."Bushfires are common in Australia during the hot summer, which begins in December, but this year the fires started much earlier, blamed on soaring temperatures, dry winds and arson. A three-year drought has left much of Australia tinder dry. The fires around Sydney have been pumping such vast amounts of smoke into the air that they appear as significant rain on the radars, the Bureau of Meteorology said on Twitter. New South Wales Health said late on Friday that some 1,140 people had sought medical assistance for breathing issues or asthma in the past week - a quarter more than in a typical week. NSW Ambulance fielded about a third more calls.

"Worst ever" and "unprecedented" have become the new norm this bushfire season, but when a blaze grows to the size of Sydney a new standard of overwhelming is set and firefighting becomes a logistical headache.

This 350,000-hectare blaze has presented new challenges for the RFS and different approaches must be taken, according to public liaison officer Stuart O'Keefe. The RFS maintains they are up to the challenge and extensive consultation, smart rostering and forward planning are paramount. But put simply, there are no chance firefighting resources can match the scale of this fire, and to do so every firefighter in the state would have to be deployed to the area. And with nearly 100 fires burning across the state that is an impossible task. ABC

Six people have been killed, nearly 700 houses burned down and millions of hectares of land razed. Strong winds fanned flames toward several suburbs in southwest Sydney on Saturday."It's been going on all day, fire came from the back and we put it out. But then another one came from the side so the firefighters covered the house in foam.," said Luke Wright who helped save his brother's home."The fence has been damaged but that's about it, very lucky," Wright told local media.

Rural Fire Service Commissioner Shane Fitzsimmons said the worst might still be ahead, with temperatures forecast to rise into the 40 degrees Celsius (104 Fahrenheit) in coming days and no meaningful rainfall expected until late January."It's a tough couple of months ahead yet and we've already seen the horrific consequences of fire so far this season," Fitzsimmons told Australia's 9News on Saturday. Neighbouring Queensland state was battling some 45 bushfires and temperatures on Saturday as high as 40 Celsius (104 Fahrenheit).