Grand farewell to the decade and the year: The Eastern Ridge of The Pacific Ring Of Fire puts on a Christmas show with 5 major quakes in the last 36 hours 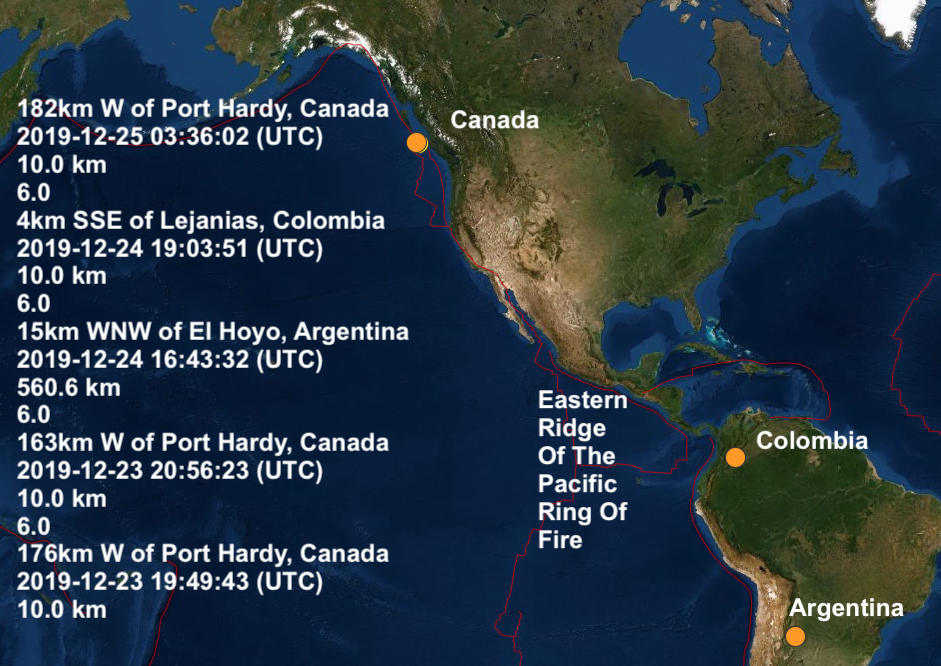 As we move into the roaring 20s in less than a week, the Pacific Ring Of Fire is putting on a spectacular show with 5 major quakes in the last 36 hours.

Another major quake struck, west of Port Hardy, British Columbia last night making it 3 major quakes in just over 24 hours in the area where Canada's largest historical earthquake- a magnitude 8.1, occurred on August 22, 1949. 3 large aftershocks have been registered with one, registered at magnitude 5.7

The recent quakes bring the December total to 11 major quakes (mag 6 or higher) and 143 for 2019 so far, the no of major quakes so far this decade is 1494. The decade started

The decade began with an immense disaster in Haiti, already the poorest country in the Western hemisphere. A devastating, 7.0 magnitude earthquake hit the island on January 12, killing hundreds and thousands of people (220,000 according to Haitian Government figures), and causing severe damage to buildings. UN News

The decade saw the most powerful earthquake ever recorded in Japan, and the fourth most powerful earthquake in the world since modern record-keeping began in 1900. The earthquake triggered powerful tsunami waves that may have reached heights of up to 40.5 meters (133 ft) in Miyako in Tōhoku's Iwate Prefecture and which, in the Sendai area, travelled at 700 km/h (435 mph) for up to 10 km (6 mi) inland. Residents of Sendai had only eight to ten minutes of warning, and more than 19,000 were killed, many at evacuation sites, more than a hundred of which washed away. The earthquake moved Honshu (the main island of Japan) 2.4 m (8 ft) east, shifted the Earth on its axis by estimates of between 10 cm (4 in) and 25 cm (10 in) increased earth's rotational speed by 1.8 µs per day and generated infrasound waves detected in perturbations of the low-orbiting GOCE satellite. Initially, the earthquake caused the sinking of part of Honshu's Pacific coast by up to roughly a metre, but after about three years, the coast rose back and kept on rising to exceed its original height. Wikipedia