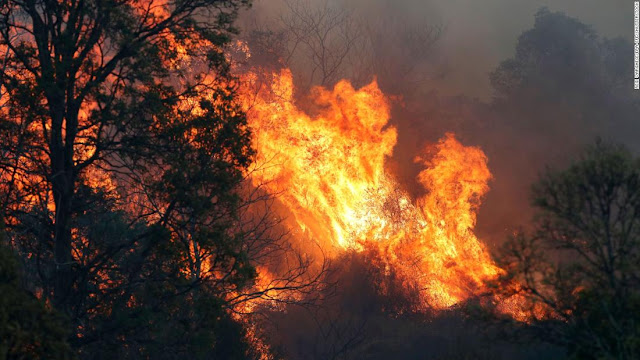 The number of properties damaged or destroyed by bushfires raging across New South Wales is set to rise after firefighters lost control of a backburn, inadvertently starting another blaze. Up to 20 buildings - including homes - are feared lost after the huge Gospers Mountain blaze northwest of Sydney spread out of control on Sunday. Almost 2000 firefighters were battling 108 blazes across NSW on Monday, ahead of extreme heat forecast for much of Australia throughout the rest of the week. Heat records could tumble, with forecast tops of 44C in Adelaide on Friday, 41C in Melbourne on Friday, and 43C in Canberra on Saturday. Areas of inland South Australia are forecast to have five consecutive days of 45C or hotter, with three consecutive days of 47C and above. Brisbane equalled its record for the hottest December day at 41.2C on Monday. The Guardian

Toxic Sydney bush fire haze a public health emergency because of the high levels of tiny particles (PM2.5) which can cause lung cancer

Australia's biggest city is facing a "public health emergency" over the bush fire smoke that has choked Sydney for weeks, leading doctors warned on Monday (Dec 16) after hospitals reported a dramatic spike in casualty department visits. Hundreds of bush fires have been raging across Australia for months, with a "mega-blaze" burning north of Sydney destroying many homes overnight and fires near Perth threatening towns. More than 20 medical groups including the Royal Australasian College of Physicians - which represents 25,000 doctors and trainees - released a joint statement on Monday calling on Australia's government to address the toxic air pollution. "The air pollution in NSW (New South Wales) is a public health emergency," the Climate and Health Alliance said. "Smoke from bush fires has produced air pollution of up to 11 times the base 'hazardous' level in parts of Sydney and New South Wales," it said. "Bush fire smoke is particularly hazardous because of the high levels of tiny particles (PM2.5)." See map below. The Strait Times 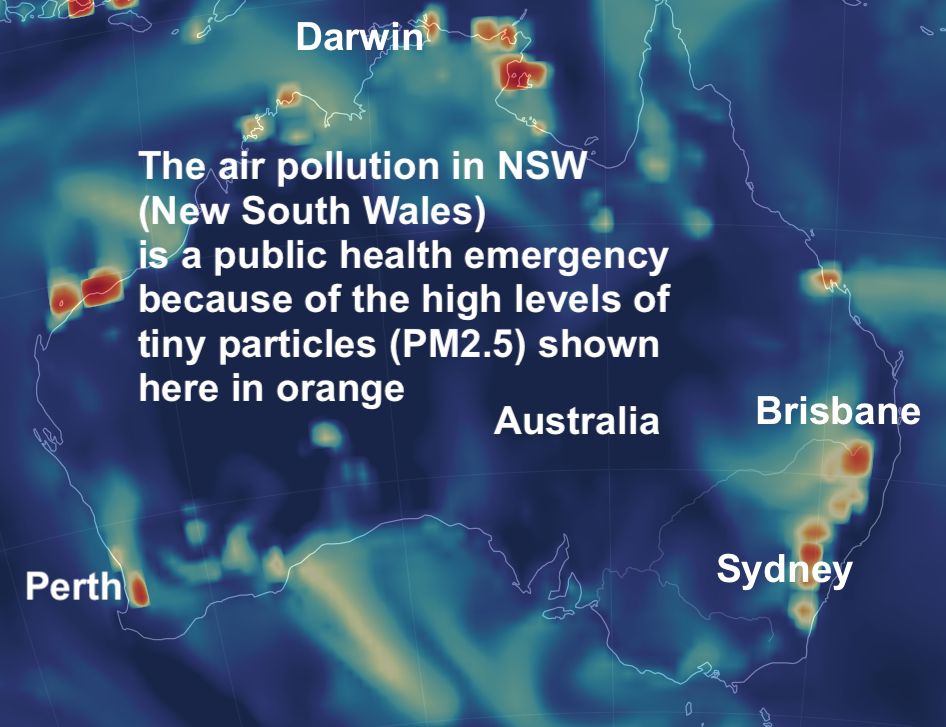 "Some extraordinary behaviour of that fire"

A backburning operation intended to contain a massive wildfire in eastern Australia sparked out of control, damaging buildings and cutting off major roads, authorities said, as the country heads into another heatwave that may topple temperature records. The accident occurred about 250km northwest of Sydney, where firefighters were trying to stop a blaze of some 378,000 hectares reaching communities by employing pre-emptive controlled burning. “We saw a dramatic shift in conditions, a flare-up of fire, some extraordinary behaviour of that fire, and that fire has spread,” New South Wales state Rural Fire Service Commissioner Shane Fitzsimmons told the Australian Broadcasting Corp on Monday. FMT News

Nearly 100 fires have torched an area bigger than Connecticut in New South Wales. 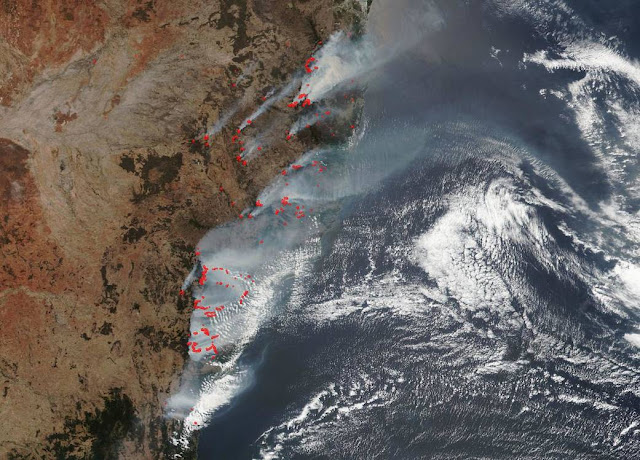 NOAA-NASA's Suomi NPP satellite flew over the New South Wales fires in Australia on December 16, 2019, and found devastation from the ongoing fires. The New South Wales Rural Fire Service is reporting 96 fires are burning and to date, the size of the area burned is 1.5 times the size of the state of Connecticut (approximately 5.3 million acres of land). These fires are largely the result of an atypical drought for the area, increasing temperatures, and low humidity. Coupled with the danger of the fires is the resulting shroud of smog that is currently covering Sydney. NASA

The fires are the worst people have ever seen. In the state of New South Wales alone, the Rural Fire Service estimates the bushfires have destroyed 2.7 million hectares -- more than three times the land area of Hokkaido. Experts estimate more than 2,000 koalas have already died along the east coast. "We really do face losing koalas in New South Wales at least. It's just terrible," 69-year-old Ashton, a Koala expert said. Ashton estimates 85 per cent of the Port Macquarie region's koalas have perished in the fires, with the area home to some of the east coast's largest and most genetically diverse populations. Before the 2019 fire season, Ashton said koalas in the Port Macquarie region were labelled as "vulnerable," meaning they faced a high risk of extinction within the state in the medium-term future. Following the fires, Ashton and her team thought koalas might be reclassified as "endangered." But having seen the full extent of the still-burning blazes, she now fears their numbers and genetic diversity are so low they will be classified as "functionally extinct." "I don't know if we'll ever recover," she said. "The tragic thing is they breed very slowly. A female will have a joey once every 18 months to two years." The fires in New South Wales, which have been labelled "unprecedented" by firefighters and scientists alike, have been fueled by one of the worst droughts the state has ever seen. Kyodo News