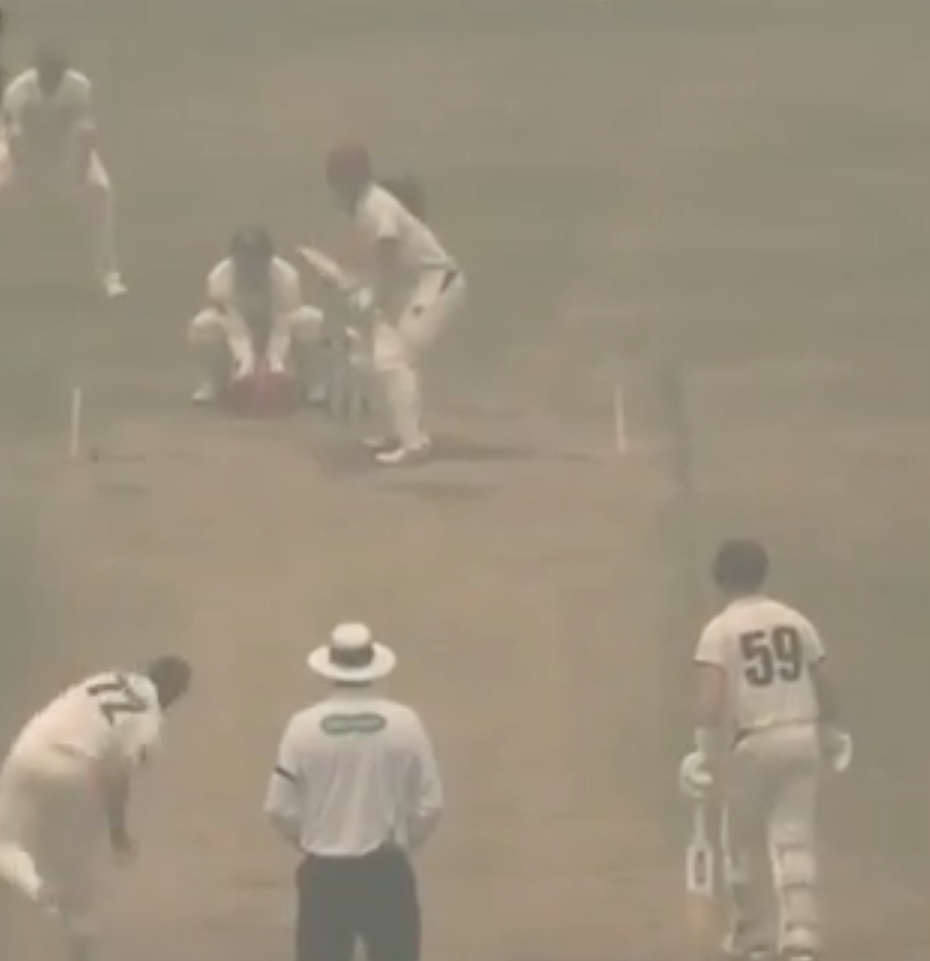 Cricket continues during the smog in Sydney.
The pressure is mounting on Scott Morrison to do more to address climate change, as bushfires continue to burn across the country and smoke blankets Sydney. Thousands of the city’s residents are planning to attend a “climate emergency rally” this evening, where they will demand action. The event’s organisers are urging them to wear face masks as a “symbol of the climate crisis and public health disaster”. And the government has come under renewed pressure this week from a number of prominent voices, including some from its own side of politics. In a blunt speech to the National Smart Energy Summit yesterday, NSW Energy and Environment Minister Matt Kean said “no one can deny” the link between bushfires and climate change. “Let’s call it what it is,” Mr Kean said. news.com.aus

NSW firefighters have worked to take advantage of easing conditions as dozens of blazes continue burning throughout the state and more than 720 homes confirmed destroyed this bushfire season. More than 100 fires remained active across NSW on Wednesday night, with two - Carrot Farm Road at Deepwater and Crown Mountain south of Glen Innes - at the watch and act alert level. Meanwhile, the NSW Rural Fire Service confirmed 724 homes, 49 facilities and 1,582 outbuildings had been destroyed and 2.7 million hectares burned over the fire season. 9News

Australia's bushfires have been so devastating, the country's forests may not be able to reabsorb the toxic carbon dioxide produced by the blazes, climate scientists say. Key points: At least 2.7 million hectares of NSW land, including "exceptionally carbon-dense" forests, have been burnt this bushfire season. Drought and intense blazes have disrupted vegetation's bushfire recovery process One academic has compared the crisis to the Amazon fires. Bushfires are normally considered to be "carbon neutral" because, unlike fossil fuels, their emissions output is reabsorbed when the vegetation in fire-affected areas regrows. However, experts fear the sheer scale and intensity of this year's unprecedented fires, coupled with worsening drought conditions, has disrupted this recovery process. ABC

Thousands of protesters rallied in Sydney on Wednesday demanding urgent climate action from Australia’s government, as bush-fire smoke choking the city caused health problems to spike. Sydney has endured weeks bathed in toxic smoke as hundreds of blazes have raged across the countryside, with hospitals recording a 25 per cent increase in the number of people visiting emergency departments last week. On Tuesday smoke alarms rang out across Australia’s biggest city, with thick haze triggering smoke alarms and forcing buildings to be evacuated, school children to be kept indoors, and ferries to be cancelled. The devastating fires have focused attention on climate change, with scientists saying the blazes have come earlier and with more intensity than usual due to global warming and a prolonged drought. Around 5,000 people gathered as the demonstration began, voicing anger at the government’s silence in the face of the crisis. Japan Times