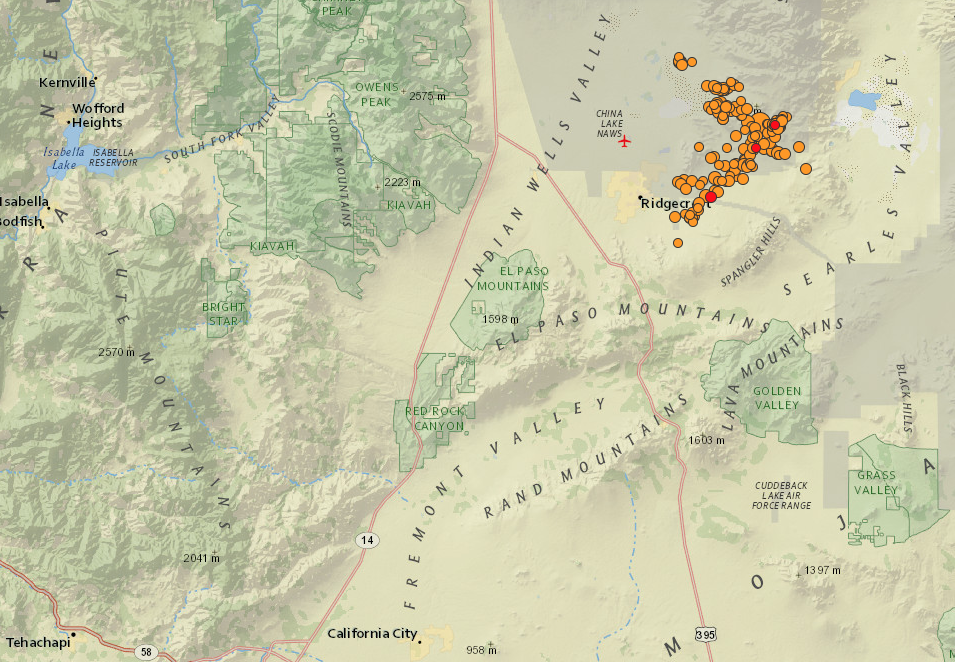 As President Donald Trump swaggered in Washington DC, hailing the "brave men and women" of the US military during a speech at a controversial Independence Day event which showed off their military might, the biggest quake in 25 years rocked Southern California with a powerful mag 6.6, (reduced of course by USGS, to a mag 6.4)

The epicentre of the 6.4 magnitude tremor was near the city of Ridgecrest, which is about 150 miles (240 km) north-east of Los Angeles and is roughly in the same area where a swarm of 3,000 small quakes struck last month.
Firefighters provided medical assistance and dealt with fires in and around the city on Friday.
People from the Mojave Desert to the Pacific coast reported feeling the quake, which hit on Independence Day.
There was significant damage in Ridgecrest, which lies south-west of the epicentre, local geophysicist Professor John Rundle told the BBC.

The quake is the largest in Southern California since the 1994 magnitude 6.6 Northridge earthquake, USGS geophysicist Paul Caruso said.
That quake, which was centred in a heavily populated area of Los Angeles, killed 57 people and caused billions of dollars of damage.
Ridgecrest may not get much respite in the hours and days ahead.
USGS seismologist Lucy Jones said more than 80 aftershocks had hit the area in the hours since the initial quake.
“We should be expecting lots of aftershocks and some of them will be bigger than the 3s we’ve been having so far,” Jones told a news conference and reported by Reuters.

Yesterday's powerful quake is the 3rd major quake to strike in July and with the large uptick in volcanic activity around the Pacific Ring Of Fire in the last couple of weeks is a major worry for scientists.
2019 looks set to be a bumper year for major quakes with this year's total of 80 now almost double the amount of 2018 up to the same time period

A swarm of more than 3,000 earthquakes hit the same California area in June according to USGS.
To some, the “swarmageddon” 40 miles east of downtown Los Angeles brought fear that a bigger threat was coming and it did, yesterday, luckily no one was killed.
As officials install more seismic sensors as part of the state’s early warning system, experts are getting an increasingly better look at California’s smaller earthquakes.
According to The Daily Mail, It’s reminiscent of activity near the San Andreas Fault three years ago that had some scientists on edge for a possible large triggered earthquake.
While that never happened, a spike in small earthquakes can raise the chances of a bigger event, albeit only slightly. Full story