Radiation levels up to 6,000 times higher than those found in the open ocean found in seafood near "CRACKED" Marshall Islands nuclear Runit Dome 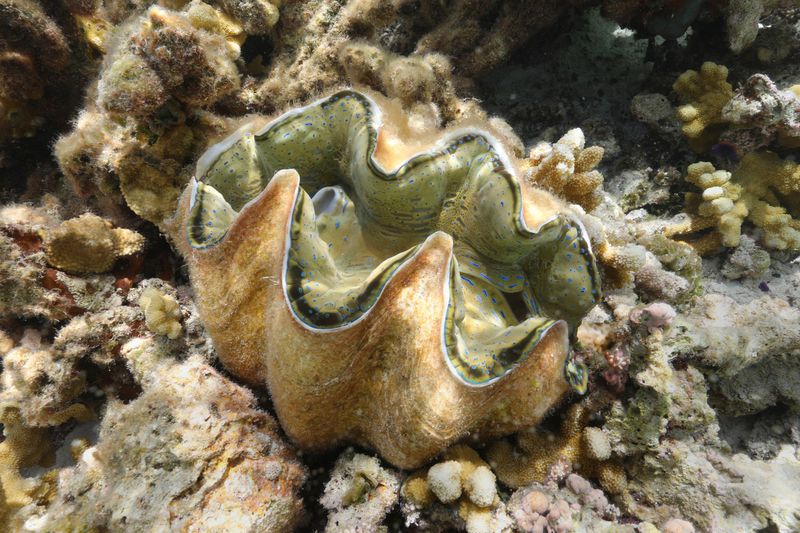 High levels of radiation in giant clams led one expert to ask “in what way was Runit [Dome] a cleanup?” (Carolyn Cole / Los Angeles Times)
High levels of radiation have been monitored in giant clams close to the Central Pacific site where the United States entombed waste from nuclear testing almost four decades ago, raising concerns the contamination is spreading from the dump site’s tainted groundwater into the ocean and the food chain.
The findings from the Marshall Islands suggest that radiation is either leaking from the waste site — which U.S. officials reject — or that authorities did not adequately clean up radiation left behind from past weapons testing, as some in the Marshall Islands claims.
According to the LA Times,
The radioactive shellfish were found near Runit Dome — a concrete-capped waste site known by locals as “The Tomb” — according to a presentation made by a U.S. Department of Energy scientist this month in Majuro, the island nation’s capital.
The clams are a popular delicacy in the Marshall Islands and in other nations, including China, which has aggressively harvested them from vast swaths of the Pacific.
According to Terry Hamilton, a veteran nuclear physicist at the Energy Department’s Lawrence Livermore National Laboratory, Runit Dome is vulnerable to leakage by storm surge and sea level rise, and its groundwater, which is leaking into the lagoon and ocean, is severely contaminated.
But the radiation in the shellfish and surrounding lagoon is not coming from the 40-year-old dome, said Hamilton in a slide he presented May 15 to an audience assembled in a hotel conference room in Majuro.
He said isotopic analyses indicated the lagoon contamination was from residue from the initial nuclear weapons testing.

Between 1946 and 1958, the United States tested 67 nuclear devices in the Marshall Islands, including 44 in Enewetak Atoll, one of the nation’s 29 coral atolls.
Although the Marshall Islands were home to only 6% of the total number of tests conducted by the United States, it bore the brunt of more than half the total energy yield of all U.S. nuclear weapons testing.
Much of the fallout from those events are now entombed within Runit Dome. According to a photograph taken of Hamilton’s presentation slides, the 377-foot-wide crater in Enewetak Atoll contains groundwater samples with radiation levels 1,000 to 6,000 times higher than those found in the open ocean.
Some Marshallese who attended the presentation are, not surprisingly sceptical about the agency’s conclusion that the dome is not leaking into the lagoon.
“What they’re saying is, here is the dome. And here, in the lagoon area, there is radiation. ... But as far as leaking from the dome, we don’t think that’s the case?” said James Matayoshi, mayor of Rongelap Atoll, one of the atolls contaminated by fallout from the nuclear testing program.
“That doesn’t make any sense.”

Today, due to disrepair and rising sea tides, the dome is dangerously vulnerable.
A strong storm could breach the dome, releasing the deadly legacy of America’s nuclear might.
“I’ve just been with the President of the Marshall Islands (Hilda Heine), who is very worried because there is a risk of leaking of radioactive materials that are contained in a kind of coffin in the area,” Mr Guterres said in Fiji, AFP reported.
Mr Guterres’s “coffin” was the product of a belated American response to the testing of the 1940s and 1950s.
Beginning in 1977, the Defence Nuclear Agency began a sustained cleanup of the nuclear debris left over on Enewetak Atoll, a slender archipelago in the Marshall Islands’s north-west corner.
Enewetak Atoll was subjected to repeated blasts during the testing, and inhabitants were forced to relocate before the explosions began.
Beginning in 1977, 4,000 US servicemen began collecting an estimated 73,000 cubic meters of tainted surface soil across the islands, according to the Marshall Islands’ government.
The material was then transported to Runit Island, where a 328-foot crater remained from a May 1958 test explosion.
For three years, the American military dumped the material into the crater.
Six men reportedly died during the work. Locals took to calling it “The Tomb,” The Guardian reported.
In 1980, a massive concrete dome – 18 inches thick and shaped like a flying saucer – was placed over the fallout debris, sealing off the material on Runit.
But the $218 million (£172 million) project was only supposed to be temporary until a more permanent site was developed, according to The Guardian.
However, no further plans were ever hatched.
In 1983, the Marshall Islands signed a compact agreement of free association with the US, granting the island nation the right to govern itself.
But the deal also settled “all claims, past, present and future” tied to the nuclear testing, and left the dome in the care of the island government.
According to a 2017 report by the Australian Broadcasting Corporation, among the fallout material was plutonium-239, an isotope that is one of the world’s most toxic substances, and one with a radioactive half-life of 24,100 years.
The staying power of that material is the problem.
It’s still there, only 18 inches of concrete away from waters that are rising.
“That dome is the connection between the nuclear age and the climate change age,” climate change activist Alson Kelen told the Australian broadcaster.
Cracks reportedly have started to appear in the dome.
Part of the threat is that the crater was never properly lined, meaning rising seawater could breach the structural integrity.
“The bottom of the dome is just what was left behind by the nuclear weapons explosion,” Michael Gerrard, the chair of Columbia University’s Earth Institute, told ABC. “It’s permeable soil.
There was no effort to line it. And therefore, the seawater is inside the dome.”