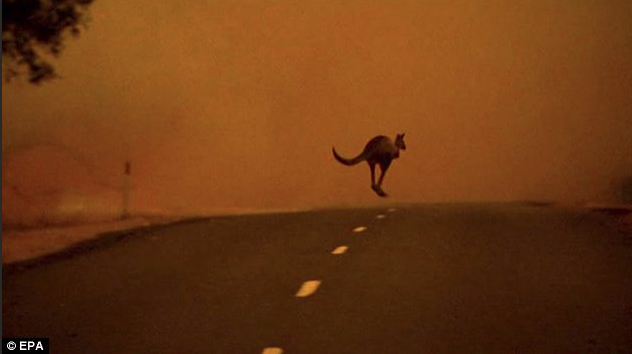 Photo EPA
As deadly temperatures so high petrol pumps have seized up and the mercury hitting 49.3 Celsius (120.74 F) in parts of Australia, forty firefighters have come under attack from an out-of-control bushfire that is suspected to have been deliberately lit in central Gippsland.
Thousands of residents in 14 towns are on high alert as hundreds of firefighters and aircraft continue to battle the blaze, which spread from 600 hectares on Friday to 10,000 hectares overnight as strong winds swept in from the south-west with the evening's cool change.
The fire is about six kilometres south from Rosedale in Victoria's east.
A watch and act warning remains in place for 14 towns surrounding the blaze, including Fulham, Giffard West, Kilmany, Kilmany South, Longford, Nambrok, Pearsondale, Rosedale, Sale, Stradbroke, Stradbroke West, Willung, Willung South and Wurruk.
The fire is travelling in a north-easterly direction towards the towns of Kilmany, Fulum and Wurruk after burning out 2500 hectares of a pine plantation.
About $20 million worth of plantation pine had been destroyed, which would have a big effect on the logging-dependent local economy, federal member for Gippsland Darren Chester said.
Emergency Management Commissioner Andrew Crisp said three groups of firefighters were forced to take cover when they "found themselves in a very serious situation" when the wind changed on Friday evening.
"They were working at the eastern flank, which becomes the front when the wind changes," Mr Crisp said.
He said about 40 firefighters had come under threat and "were shaken as a result of it".
The firefighters were uninjured but a truck, trailer and a bulldozer belonging to Forest Fire Management Victoria were destroyed.
The fire came close to burning one house but no homes have been lost and at this stage, none are under immediate threat.
Firefighters plan to spend Saturday building a fire-break around the blaze to contain it, before backburning into the fire to cut fuel loads.
Mr Crisp said there were no known livestock losses but it was believed a lot of native animals had perished.
Minister for Police and Emergency Services Lisa Neville recognised the work of the fire services. "We are reminded today that firefighting is extremely dangerous.
We saw that last night.
It remains a very dangerous profession," she said.
Ms Neville warned Victorians that they faced a long hot summer and that residents in fire-prone areas should have a plan ready.
Emergency Management Victoria will lead an investigation into the Rosedale blaze.
Mr Crisp said the Rosedale fire was one of 200 across the state on Friday when Melbourne recorded its hottest day in five years with a top temperature of 42.6 degrees.
A 64-hectare fire in Strathbogie, near Bonnie Doon in the state's north, is also believed to have been deliberately lit on a scorching day.
Several other small bushfires continue to smoulder across the state.
State Response Controller Tim Wiebusch said the Strathbogie fire was still burning but was largely under control.
Mr Wiebusch said it would take firefighters at least another 24 hours to get the Rosedale blaze contained but that milder firefighting conditions were forecast for the next 72 hours.
He said an aerial bomber equipped with night-vision gear had been used to douse parts of the fire overnight, the first time such equipment has been used after sunset in Australia.