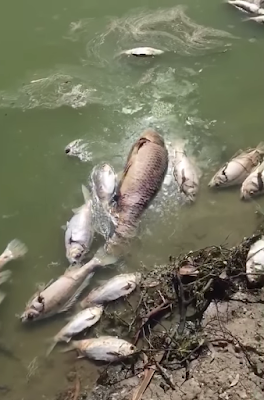 Photo The Guardian Menindee Lakes: hundreds of thousands of fish dead in Murray-Darling basin Port Augusta was the hottest place in South Australia when it hit 49.5C at 4.22pm, one of 25 heat records that fell today.
Adelaide has recorded Australia's hottest capital city temperature of all time, hitting a new high of 46.6C at 3.36pm.
West Terrace reached 46.6C at 3.36pm after earlier recording 46.2 at 1.42pm.
The previous Adelaide record was 46.1C, set on January 12, 1939.
Ceduna reached 48.6C at 2.18pm but is cooling rapidly, its temperature dropping 12 degrees in 40 minutes as the cool change rolls over the state from the west.
The Red Lion, a pub in the city’s Elizabeth North suburb, promised to hand out free beers if the mercury rose above 45C.
By 1pm, there was a line out the door and around the block.
According to the Guardian, the mass fish kill crisis in New South Wales is now affecting the state’s north with thousands of carcasses found on the banks of Lake Inverell.
The federal government has launched a review into why up to a million fish died along the Darling River at Menindee, in the state’s west, earlier this month.
Meanwhile, Hundreds of thousands of fish have been killed along a stretch of the Lower Darling River in New South Wales in a second major incident which has led some experts to fear whole populations of local native fish have been wiped out.
Residents near the Menindee Lakes are reporting what is the second major fish kill along a 20km stretch of water near Weir 32.