"Thousands estimated to be dead! " Indonesia quake horror another 2,000 dead from landslides with 1,200 dead from quake and tsunami 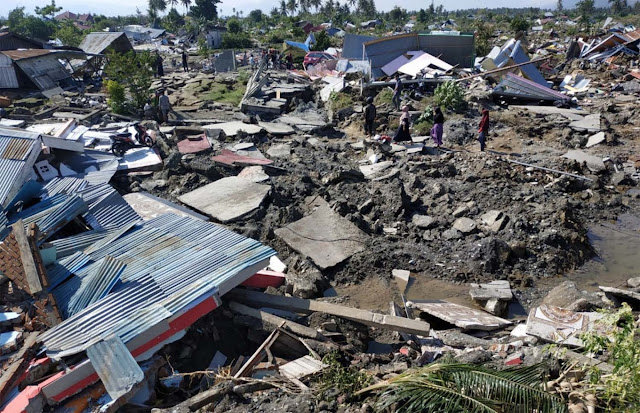 The condition in the Perumnas Bala Roa housing complex in Palu on Sunday. (Antara/Darwin Fatir)

The death toll from the 7.4-magnitude earthquake and tsunami in Indonesia has now risen to 1,200 with still many missing, a further 2,000 are thought to be dead from landslides.
With no power and many of the villages isolated the death toll is expected to rise substantially.
A number of areas in Central Sulawesi have been hit by large amounts of mudflow following a 7.4-magnitude earthquake that jolted the province on Friday that also triggered a tsunami.
Petobo subdistrict in South Palu district, Palu, which is located 10-kilometres from the sea, has been struck by such mudflow.
It is feared that about 2,000 people in the subdistrict are dead, with homes having been dragged away by the mud.
Yusuf Hasmin, 45, said residents tried to escape the mudflow they claimed to have been rolling in like waves.
He and his family had survived, but he had not heard from other relatives.
The same unexpected disaster hit another subdistrict in West Palu district, Palu.
The subdistrict was sunken to the ground.
Thousands were estimated to be dead.
Search and rescue teams were on the scene Sunday afternoon with heavy equipment to dig and clean the debris.
Mobile phone footage of the mudflow circulated online on Sunday, showing several buildings being dragged.
The video was accompanied by a broadcast message saying the incident occurred in Jono Oge village in Sigi regency on Saturday afternoon.
The person recording the event could be heard saying, "Oh Jesus Christ," while the houses before him were moving.
Another video posted on Twitter shows people running and houses collapsing because of liquefaction in an unidentified location in Palu.
National Disaster Mitigation Agency (BNPB) spokesman Sutopo Purwo Nugroho said during a press briefing on Sunday in Jakarta that soil liquefaction had occurred, a natural phenomenon that takes place when solid soil loses its strength and behaves like a liquid due to stress such as shaking during an earthquake.
"We observed that such phenomenon had dragged buildings away in several locations, such as in Sigi Biromaru district in Sigi regency and South Palu district," Sutopo said.
The agency says the death toll from Friday's earthquake has risen to 1,232, with the majority of victims having been buried under rubble or struck by the tsunami.
The agency has also recorded 540 injured people and more than 16,000 others are reportedly displaced.