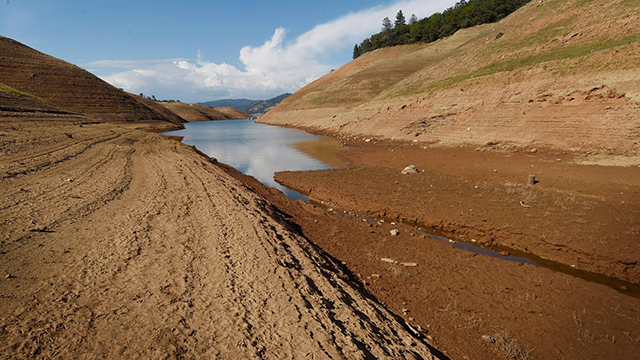 Water Authority chief Giora Shaham says Israel suffering longest drought in a century and that water consumption will have to be limited if another dry year follows.
Israel has been experiencing the most consecutive drought years in more than a century, Israel Water Authority director Giora Shaham said on Sunday.
He noted that two islands have already arisen in Lake Kinneret due to the dropping water levels, and one of them is expected to merge with the surrounding land.
Shaham said that in order to cope with the ongoing drought, the authority will build a system of pipelines that will bring water to Lake Kinneret from the Eshkol Reservoir in the Lower Galilee.
The water authority will have to take further measures to limit water consumption if there is another drought year.
These could include limits on the watering of private and public gardens.
"I won't let the groundwater levels in Israel fall below the red lines as happened in Gaza," Shaham said.
Another measure being taken by the authority is increasing the amount of purified wastewater produced in the area of Tel Aviv and surrounding cities.
Shaham says that this year the authority could supply close to 10 million cubic meters of water for agricultural irrigation, primarily in the area near the Gaza border.
"According to our forecast, the amount of precipitation this coming winter will be average, but that is just a forecast," he said.
Shaham also said that the water authority is readying tenders to build two large desalination plants that would be added to the existing ones.
One would be in the Nahal Soreq area and the other likely near Mahaneh Shraga, north of Acre.
He said that at full capacity, the Mekorot desalination facility in Ashdod produces 100 million cubic meters per year, but that it is in need of repairs that will costs 200 million shekels (over $55 million). The authority aims to sell the facility to another developer who will also carry out the needed repairs, he added.
Shaham also said that the authority continues to send an influx of water to the streams in the Golan Heights in order to reduce the pollution that causes leptospirosis to spread, though he expressed some skepticism about the move's effectiveness.