Burn-baby-burn: It's too late to put out the fire! Scientists claim a domino effect around the world will result in a 'hothouse Earth' state 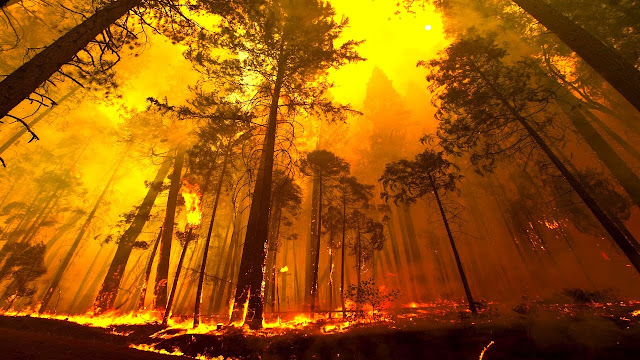 It's like the script of a Hollywood Si-Fi film and Bible prophecy and as many of us have seen in the Northern Hemisphere this summer our biggest nightmare.
A new study by the Stockholm Resilience Centre is claiming places on Earth will become uninhabitable after a series of events would cause a tipping point producing a domino effect around the world resulting in a 'hothouse Earth' state. Report Here
But as the most of the Northern Hemisphere is struggling from a record-breaking heat this summer, has the tipping point been breached already?
The statistics can't lie and when just a few of the extraordinary events of this summer are placed together we can see a very worrying pattern forming.
Last year California suffered it's worst wildfire in living memory but by early August 2018 that record has been surpassed.
According to the BBC, California's biggest wildfire on record is expected to burn for the rest of the month, fire officials said on Tuesday.
The Mendocino Complex fire has already engulfed 290,692 acres (117,639 hectares) - almost the size of Los Angeles.
It's not just California, some of the worst wildfires ever seen have raged across Europe this summer.
This summer has already seen some of the most extreme weather of all time.
Several countries have been hit by wildfires including the Arctic Circle, flash floods and droughts, with some facing devastating death tolls.
Below are just a few headlines from across the world captured from the last couple of months.

At least 29 people have died due to heatstroke in South Korea and more than 2 200 suffered heat-related conditions, as prolonged and record-breaking heatwave engulfs the country.

Temperatures climbed to around 45 degrees Celsius (113 degrees Fahrenheit) in many inland areas of Portugal and were expected to peak at 47 C (116.6 F) in late July.

Spain expected to smash the hottest temperature ever recorded in Europe at the beginning of August when temperatures approached 50 deg C (120 deg F) in some parts of Southern Spain.

North Korea has warned of 'natural disaster' amid record heatwave and drought this summer as the fragile infrastructure is in danger of collapse.

Ten people died and more than 120,000 have been forced to flee their homes after days of heavy monsoon rains flooded villages in central and southern Myanmar in late July, according to government officials.

The heat wave shut down Hanover airport in Germany, damaged roads and devastated crops, roads melted in Holland and the UK as temperatures reached the high 30's, (100 deg F), with no rain in parts of Europe for more than 60 days in July.

Temperatures in Japan reached 41.1C, a new record for the country, amid a deadly heat wave that claimed nearly 100 lives with 35,000 hospitalised.
The temperature was recorded in the city of Kumagaya, a city northwest of Tokyo, beating a previous high of 41C.

Still, in Japan, almost half a year's rain fell in Japan in just ten days in July.
Nearly 10 million people were ordered to leave their homes with a further 10,000 forced to live in shelters.
More than 200 people died and more than 250,000 people were without water.

The planet's hottest continent endured its hottest weather ever.
An Algerian city soared to 124.3 degrees (51.3 Celsius), adding to the onslaught of records for extreme heat set around the planet during July.

In the first week of July breathing problems to asthma attacks from bushfires as temperatures reached 117 deg F (47.22 deg C) in Southern California as records tumbled.

On the 1st of June, a heat wave in Mexico that had increased temperatures to 50 C (122 F) in many areas led authorities to declare a state of emergency, the country's National Weather Service (SMN).

At the end of May, strong winds, lightning and thunderstorms swept through northern and eastern India, killing at least 54 people as incredible heat caused devastation.
People fell prey to dizziness and dehydration merely after spending a couple of hours in the scorching sun, birds were reported falling out of the sky due to dehydration and heatstroke and roads and cars melting.

In August, researchers measured a sea surface temperature of 78.6 °F, which was 0.2 °F greater than the previous record from an unusual warming event in July 1931, off the waters of San Diego.
The surface sample was the warmest it has been since the record began in 1916.

In July, health authorities claimed up to 70 people died in Quebec as a result of heat-related complications since the beginning of an early July heat wave that saw temperatures climb to more than 40 C with the humidex.

Pakistan experienced the world's hottest April day on record, with temperatures peaking at 122.4F (50.2C), according to experts.
The Pakistan Meteorological Department confirmed the extreme temperature was recorded in the city of Nawabshah on Monday, April 30, potentially making it the hottest April temperature ever witnessed on Earth

And still in Pakistan, in May, a heatwave killed 65 people in Pakistan's southern city of Karachi as temperatures hit 45 degrees Celsius (113 Fahrenheit) during Ramadan.

In July, a drought emergency was expanding through the breadbasket of America.

In August, a mass mortality never seen before was reported as thousands of fish, sea turtles, manatees and other marine life are found dead from massive algae bloom in Florida.

At the end of June, it was reported that scientists estimate that thousands of dead seabirds are washing up along the coasts of western Alaska.
Common murres, an abundant North Pacific seabird, have been found dead on shores from Shishmaref to St. Lawrence Island, it's the third year in a row thousands of seabirds have washed up dead along the shores of Alaska.

In June, an estimated 100 tons of dead fish washed up on Sakhalin Island in Russia, north of Japan.

In April, hundreds of tons of sea worms or pinucas beached on the beach of Carelmapu, Los Lagos region, in Chile.
Harmful algae bloom Karenia is thought to have caused the deaths.

I could go on and on and on and each month becomes more extreme, each year becomes the worst ever.
Have we breached the tipping point?