Greece wildfire Update! Another 24 bodies have been found on a Greek beach "bracing each other" as death toll rises to 50 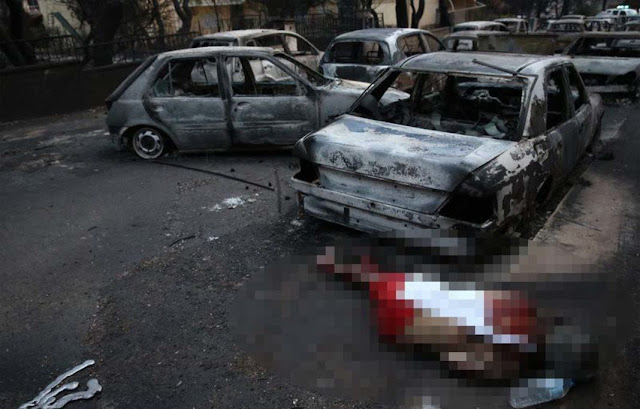 Photo GreekReporter.com
According to Greek media, another 24 bodies have been found near the Argyri Akti beach, in Mati, east of Athens, bringing the death toll from the fires to 50
Apparently, the bodies were found bracing each other.
Speaking to the Greek media, Nikos Economopoulos, President of the Hellenic Red Cross, said that the victims were discovered bracing each other.
They were trying to find a way towards the relative safety of the sea.
Among the dead are children.
Dozens of cars were burned nearby.
Another sixty-nine victims have been hospitalised.
Greek authorities have declared a state of emergency in the eastern and western parts of greater Athens, as fires fanned by gale-force winds raged through pine forests and seaside towns on either side of the Greek capital.
One fire was burning Monday northeast of Athens in the Penteli area, moving into the town of Rafina. In nearby Mati, the coast guard was sending a patrol boat to evacuate people trapped on a beach by the flames.
The second wildfire was ravaging mountainous pine forests 50 kilometres (31 miles) west of Athens. The blaze has created such thick smoke that the main highways between the Peloponnese and the Greek mainland have been shut down and an orange haze has descended on Athens.