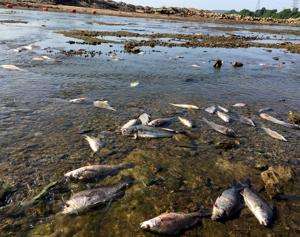 Photo © Local News RSS EN-US
The Arkansas River at Tulsa essentially dried up downstream from a closed Keystone Dam and below a closed, yet leaky, Zink Dam on Friday.
Tens of thousands of fish died as a result.
While the air temperature rose to near 100 degrees and the water temperature was not far behind, fish crowded into shallow pools below the dam in often futile efforts to survive.
Carcasses littered the gravel bars as resident bikers and trail walkers stopped to ask what was going on.
"These were mostly big fish, 15- to 30-plus inches long, most with their backs out of the water, mainly drum, blue cat, channel cat, flathead catfish, paddlefish, gar, striped bass, hybrid bass, white bass - just about every kind of fish you find in the river except for a sturgeon or a sauger," said Josh Johnston, northeast region fisheries supervisor for the Oklahoma Department of Wildlife Conservation.
"It was a big mess."
What caused the die-off is obvious: It was hot, there was very little water and fish were caught high and dry or suffocated for lack of dissolved oxygen in the water.
Why it happened and how to make sure it doesn't happen again is another question, Johnston said. The incident increases worry and may serve as an example of how complicated it may be in the future to manage water flows with more low-water dams planned for the river, he said.
"It's not even clear to me who exactly will be controlling those dams and managing the flows," he said.
Thursday night it was obvious the river needed water.
"I tried everything to reach someone at the (U.S. Army Corps of Engineers) but I couldn't find anyone at 10 o'clock at night," he said.
"In the morning we connected, but the thing is when you open the dam at Keystone, it takes at least nine hours for the water to come up at Zink Dam."
The Tulsa District Corps website shows Keystone increased from 60 cubic feet per second to 11,950 cfs at 10 a.m. Friday.
Corps Tulsa District spokesman Brannen Parrish said operations upstream at Keystone Dam have been unusual with both of the Southwest Electric Power Company generators down for repair work so the Corps released water through the dam's Tainter gates.
With nesting season in progress for the endangered least tern on river gravel bars, the Corps has been working with the U.S. Fish and Wildlife Service to run regular 12,000 cfs releases to fill the river and encourage the birds to nest higher on sandbars so they are less likely to be washed out by high waters, he said.
"We were basically mimicking what we usually go through the generators by opening the Tainter gates, which wasn't a problem because we have plenty of water in Keystone," he said.
"All we know is that apparently the fish came up with the high water and when the flow stopped they were caught but that doesn't usually happen."
A smaller fish kill occurred immediately below Keystone Dam two weeks ago when the gates were shut and the generators were off, but that problem was solved by opening a sluice gate to maintain a minimal flow.
Flow data on the Corps website notes it as a 60 cfs release.
"That's a very minimal flow in a big river, but it worked for the fish directly below the dam," Johnston said.