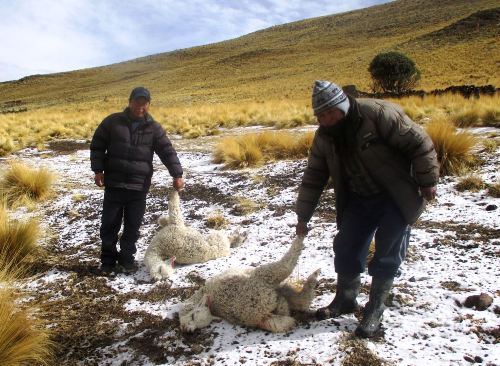 Photo yamkin.wordpress.com
According to Chile's Ministry of Health (Minsa), 604 people have died of pneumonia by June 20, 2018, due to low temperatures.
The number includes more than 400 older adults and 72 children under the age of 5.
Since winter season is just beginning, low temperatures, snow and frost are expected to continue.
The director of the National Center of Epidemiology, Gladys Ramirez, said that Lima has the highest number of influenza AH1N1, followed by Piura, Puno, Cuzco, Madre de Dios and Tacna.
This season's frost arrived earlier than usual and has already affected more than 32,000 Peruvians in 11 regions of the country.
In some areas, such as San Antonio de Putinas in Puno, temperatures plummeted to - 15 °C (5 °F), causing deaths of at least 6 children.
The Peruvian doctor, Elmer Huertas, said that the Minsa data show that hundreds of children in the high Andean areas die every year from lung complications caused by common respiratory infections triggered by the cold, such as colds, flu and bronchitis.
"That is, children in these regions die of pneumonia, " he explains.
According to a recent study released by University of Oxford scientists, it is not just about the low temperature, but poverty and malnutrition, which does not allow children to form an adequate amount of defence cells and antibodies to fight against viral infections common in the winter.